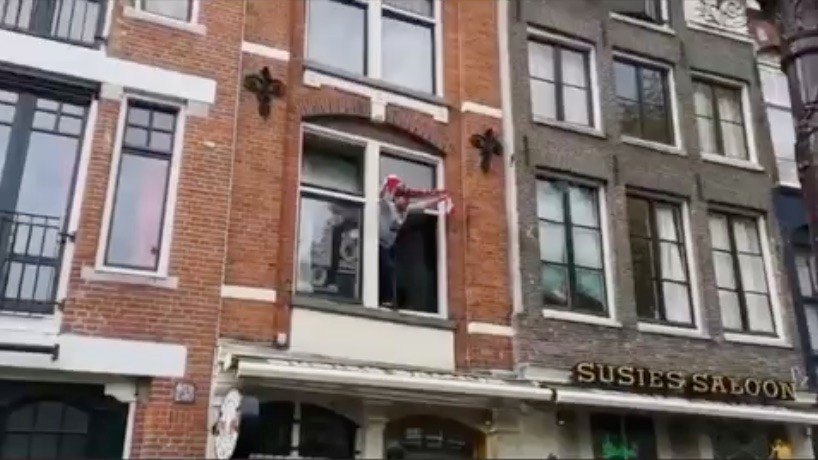 CHELSEA fans got their own back on an Ajax supporter who attempted to goad them by pelting his window with beer.

Thousands of Blues fans swarmed to the Dutch capital yesterday to watch their side claim a priceless 1-0 victory thanks to Michy Batshuayi’s late winner.

Ahead of the contest, Blues supporters conjugated in the square where they enjoyed a few drinks before kick-off.

But they were soon distracted by a lone Ajax fan who opened his window and started waving the club flag furiously.

Leaning out his window and chanting, the supporter then had to make a quick retreat when a beer was thrown in his direction.

It was met a chorus of jeers from the Chelsea fans who started throwing more drinks.

The Ajax fan then couldn’t resist one last wave of the flag before both of his windows were soaked in booze.

After finally disappearing, Blues fans chanted: “Who the f******* hell are you?”

Dutch police in the area could just stand and watch as the drama unfolded.

A video of the incident has since gone viral on social media and it appears the majority are far from impressed with Chelsea fan’s reactions.

One wrote: “It’s always Chelsea fans that give English fans a bad name.

Another added: “Such a shame to see a beautiful place turn into this.

Stupidity on both sides.

It was Chelsea fans who would have the last laugh on the night as Batshuayi’s goal fired them to the top of Group H.