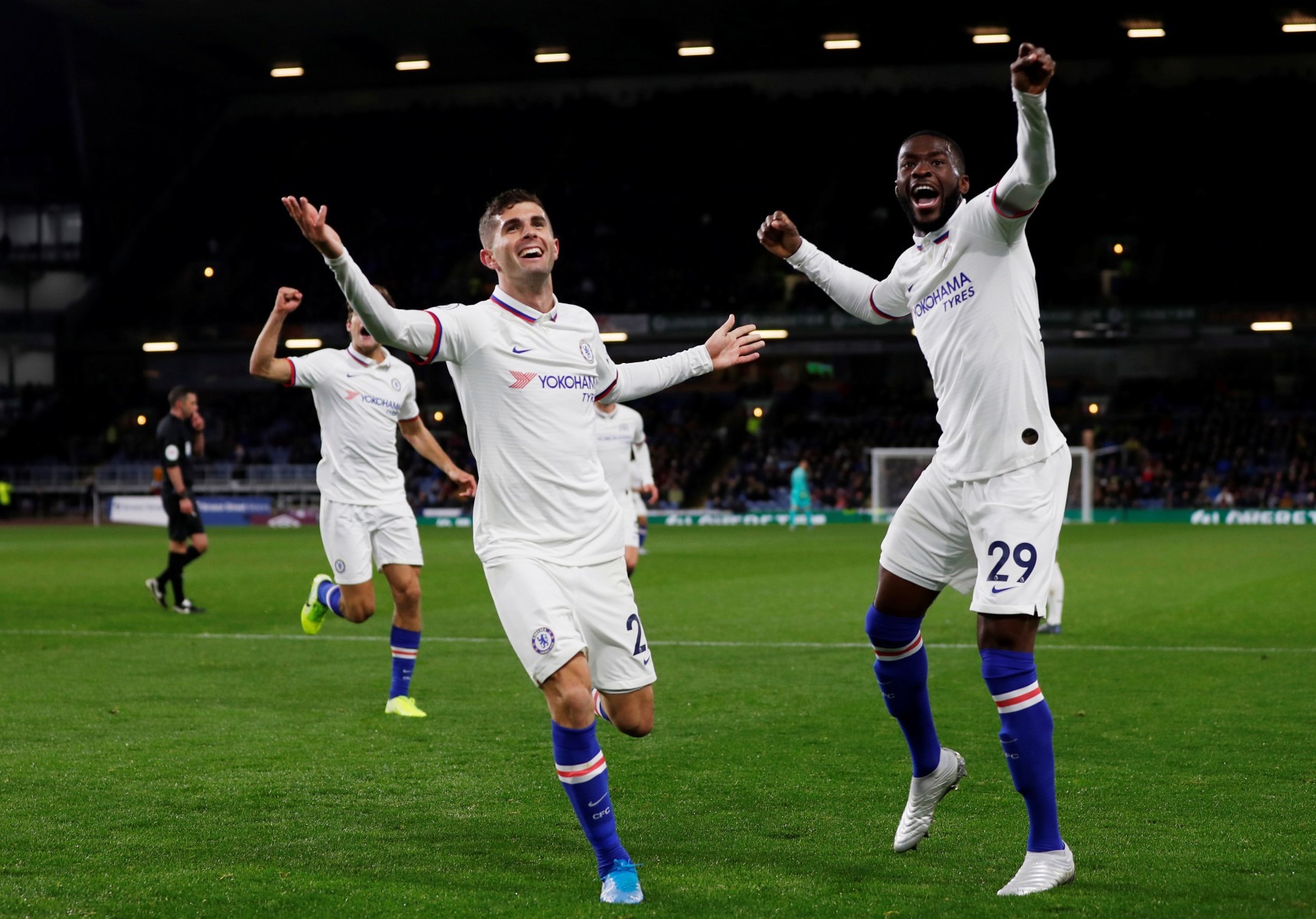 Christian Pulisic, the 58million buy from Borussia Dortmund, became a superhero at last with a first career hat-trick and his first goals for Chelsea in a rout at Turf Moor.

A left-foot strike, a right-foot strike and a header gave him the perfect early evening with which to launch his Chelsea career.

With it he became the first player from the United States to score for Chelsea as they recorded their seventh consecutive win, a sequence that began with a 7-1 win over Grimsby in the League Cup.

It also helped establish a club record of four successive top-flight away games in which this team has scored three goals or more.

More importantly, it lifted a huge weight of Pulisics shoulders as Chelsea fans had started to wonder whether the January outlay, before he was loaned back to Dortmund, was money well spent.

This, after all, was the first time manager Lampard had trusted him with a Premier League start since the end of August.

He has had to field questions as to whether the young American could be a hero just for one day.

But he bounced off the bench away to Ajax in the midweek to set up fellow sub Michy Batshuayi for the only goal of the game in the 85th minute and Lampard knew it was time to start him again.

In the dressing room after that famous Champions League victory in Amsterdam Fikayo Tomori approached him and cried Mr. President, whats that? Captain America.

The nickname he had been struggling to live up to will now surely stick.

Lampard made the call to start Pulisic in favour of Callum Hudson-Odoi, who himself had been in fine form since coming back from a ruptured Achilles.

In the 21st minute, both player and manager were punching the air in delight as the frontman from Hershey, Pennsylvania, opened his Chelsea account.

Burnley, however, shot themselves in the foot for both his first two strikes.

For the first Matthew Lowton got all tangled up as he received a header back to him from Jeff Hendrick and gave away possession to Pulisic.

He was off charging into the area.

The chance looked to be gone as three Burnley players retreated and forced him wide.

Then with a clever step over and a swing off his left boot he found the far bottom corner.

The look was mixture of sheer joy and relief as he celebrated but there was more to come with a second goal right on half-time.

This time James Tarkowski gave the ball away with a pass that Willian intercepted and he immediately released the jet-heeled Pulisic.

He roared into the box and his low shot took a deflection of Ben Mee and found the bottom right-hand corner.

This was not a player looking low on confidence indeed he had two other chances in that first half.

His hat-trick was complete in the 56th minute with a clever flick header.

Mason Mount had a corner cleared back to him and returned it with relish, whipping a cross into the six-yard box.

The pace on the ball allowed Pulisic to let if flick off the back of his head and fizz into the goal.

They withstood Burnleys early pressing and set-piece routines and then simply grabbed control of the game, with their slick passing and possession.

This was not the occasion Burnley boss Sean Dyche wanted to mark seven years in charge at the club, which he will do on Wednesday this week.

Their late rally was too late as Jay Rodriguez fired home a long-range 86th-minute screamer and Dwight McNeil had a low shot deflected in just a minute before the end of normal time.

It could have been five to by then after they were awarded a 76th-minute penalty but VAR for once overruled the referees decision deciding sub Hudson-Odoi had dived in the area.

There was certainly no contact from the legs of Lowton or Tarkowski who he went between but there was a slight push from Lowton.

Still the ref reversed it and a yellow card was awarded to the Chelsea player.

Lampard in the technical area just smiled, he could afford to by then.