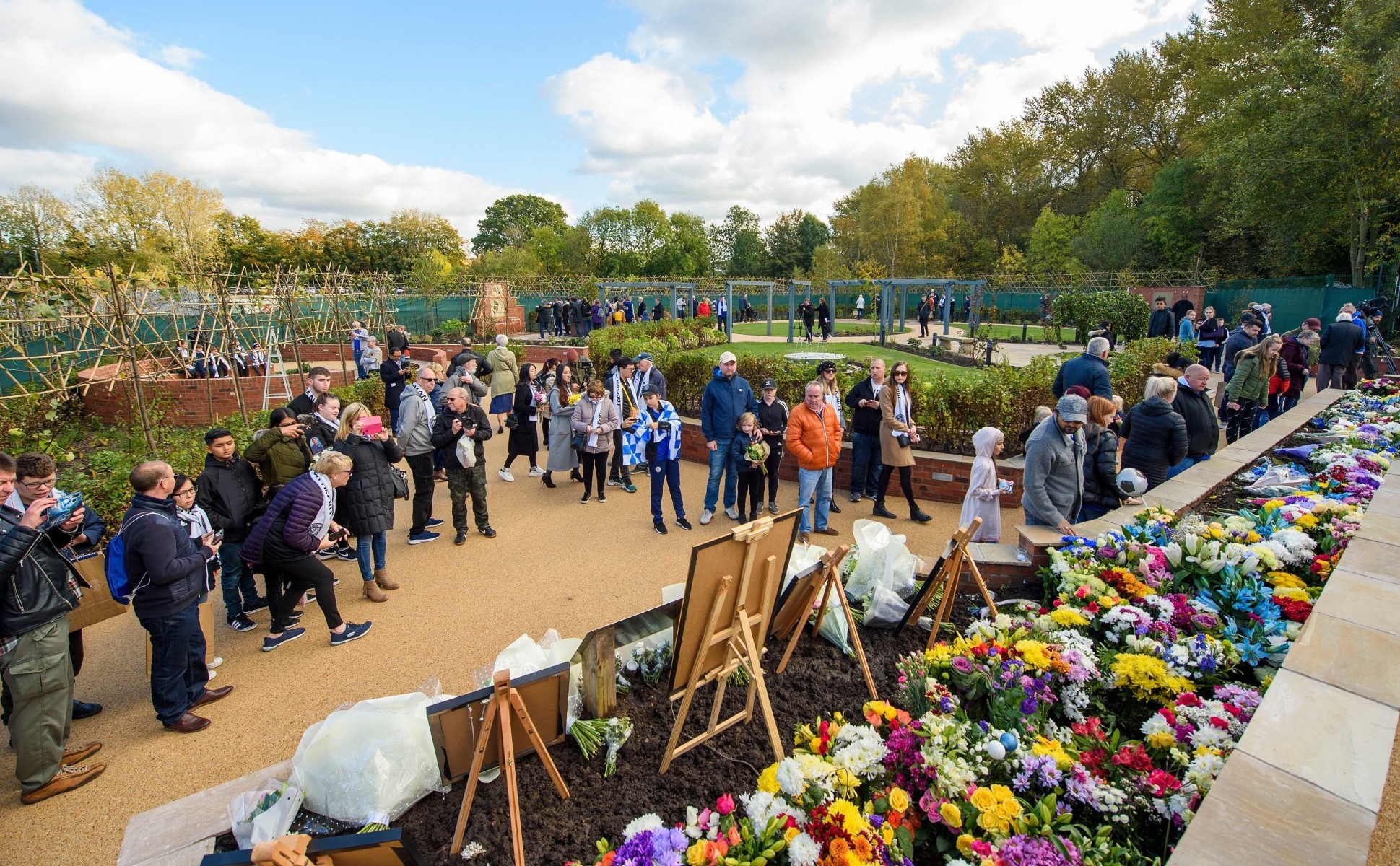 LEICESTER have unveiled an amazing garden in memory of Khun Vichai on the site of his horror helicopter crash on the anniversary of the late owner’s death.

Vichai Srivaddhanaprabha tragically lost his life alongside four others after his helicopter crashed outside the King Power Stadium in October last year.

Always in our hearts

Leicester had drawn 1-1 with West Ham moments before the accident – and now the club have found another way to pay their respects to a club hero.

After the tragic, fatal crash a year ago, fans flocked to the stadium to lay flowers and scarves to pay their respects.

Srivaddhanaprabha arrived at the club in 2010 and almost immediately wiped out debts thought to be around 100million.

Khun Vichai will always live on as a Leicester legend – both the city itself and the football club.

And this weekend, Leicester FC have been taking the time to remember the Thai billionaire – with stars including James Maddison and Jamie Vardy attending the garden’s opening on Sunday.

The Foxes fittingly equalled the Premier League record for biggest win as they thumped Southampton 9-0 on Friday night.

“Its been a year, but The Boss is constantly on our minds still, and every time we go onto field, we think about him.”

Kasper Schmeichel and Wes Morgan pay tribute to Vichai Srivaddhanaprabha and the four others who lost their lives on Saturday 27 October. pic.twitter.com/Lc3VdTs9nN

Always in our hearts

That was for the boss. Unbelievable performance from the lads @LCFC #vichai

This morning Leicester shared a host of videos, pictures and interviews in tribute to Khun Vichai.

One six-minute video was captioned: “One year on. Always in our hearts.”

Schmeichel said: “Here we are, a year later, and it still doesn’t seem real.”

Morgan added: “The wounds are still there, definitely. Its been a year, but The Boss is constantly on our minds still.

“Every time we go onto field, we think about him. We want to make him proud with our actions.

“We want to make him proud and every time we go out there, well try and win.

And he was just part of a long list of fans, pundits and players to take this weekend to remember Srivaddhanaprabha.

Leicester right-back Danny Simpson tweeted: “That was for the boss. Unbelievable performance from the lads @LCFC #vichai”.

Broadcaster Geoff Peters, following Leicester’s 9-0 win on Friday as the rain began to pour, wrote: “The rain is Vichais tears of pride showering down on that #lcfc team he built.”

Rest in Peace Vichai and good luck for the rest of the season Leicester, a proper well run club, and hell be very proud of you right now

A year on from one of the most gut-wrenching moments for my city.

His legacy will go on with us in whatever success we have.

Every trophy will be his and every game for him.

Vichai left his mark on Leicester as a city like no other in recent times.

We will always remember. https://t.co/24fXwtkThu

Cant believe its been a year since Vichai Srivaddhanaprabha passed away. An amazing man, RIP Vichai

I cannot believe it's been a year. It's hard to describe what it was like for me, it's even harder to imagine what it's been like for everyone connected to Leicester City FC.

The perfect way to remember legendary Vichai. You'll remain in our hearts forever. We miss you. pic.twitter.com/n83mkHhrwn

A really emotional watch for anyone. That was a sad day. Vichai didnt just embrace Leicester as a football club, but he embraced the community. He gave back to children, to hospitals, the fans. Hes done a remarkable job and that legacy continues. He was the perfect owner. https://t.co/9JaoPWtjRO