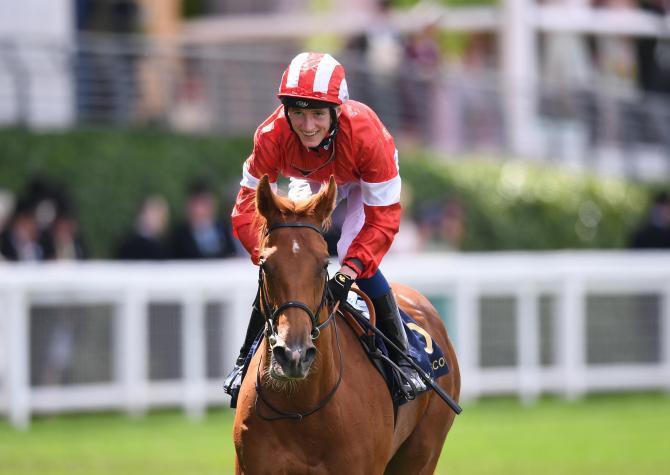 TRAVELLING a horse over to California for the Breeders’ Cup may seem all glitz and glamour on the surface.

But for the stable staff whose task it is to care for these incredible animals 24/7, the hard work doesn’t stop when you cross the Atlantic.

The Varian team are due to be represented by Group 2 winner Daahyeh in the Breeders’ Cup Juvenile Fillies Turf on Friday, for which she is a 4-1 chance with William Hill.

And Davis, who is confident of a massive run from the laid back filly, will have earned a few celebratory beers if she can get the job done.

Davis explained to Sun Racing: “We travelled out here ahead of her and met her at the airport. We flew out Friday evening and she arrived Sunday morning.

“We spent Saturday doing licensing and other jobs that we needed to make sure we were up to date before she touched down.

“I picked her up from LAX about 2am on Sunday and she arrived here at Santa Anita about 6am. It was a long flight and long day for her, by the time we had everything unpacked it was around 8.30am and she was left alone to relax for the rest of Sunday.

“She is an absolute star. She has taken all the quarantine procedures in her stride. She only lost a tiny bit of weight on the trip over and she has settled in like she’s been here for six months.

“She’s happy as Larry and Matt (Henry) who rides her out on the track says she feels great.”

Daahyeh’s daily routine mainly consists of eating and relaxing, with a little bit of light exercise thrown in. She is enjoying a fine time of things in the Los Angles sunshine.

Davis continued: “She gets her first feed at 5am, or around an hour before she goes out on the track. She then heads out, does a nice piece of exercise and then we give her a wash off when she is back in the barn.

“She’ll then get another feed and we leave her be. We will come back about 4pm, lead her out for an hour then give her her evening feed, then I’ll come back in about 9pm and I will give her another feed.

“She is very well looked after and she’s enjoying life. She’s not short of carrots and polos and she’s absolutely grand.

“We are staying 10 minutes down the road and we’ve hired a car so we can get here quickly if needed. It’s great, all the stable staff are staying together in the same hotel, you’re meeting loads of different people and it’s a great atmosphere.

“These sort of trips are why we do this job. It’s not every day you get a horse good enough to bring to a Breeders’ Cup, let alone one with a favourites chance. Fingers crossed everything goes right.

“We couldn’t be happier with how things have gone, Roger is over the moon with her. It’s been good to get her out on the grass and get a feel of the track under her feet. It’s unbelievable and we are going into Friday feeling confident.”