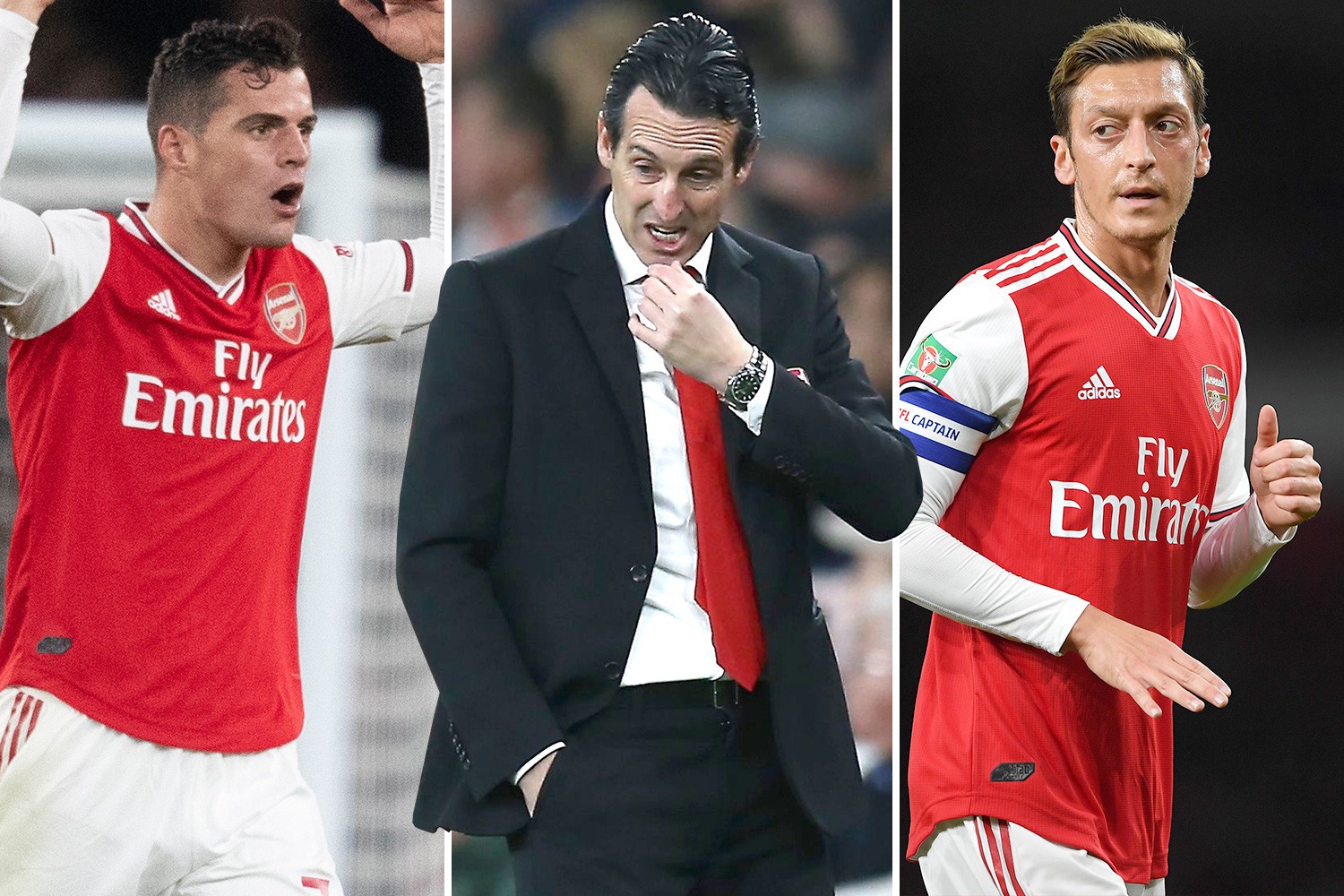 ARSENAL fans went more than 20 years before demanding the head of Arsene Wenger.

The atmosphere in and out of the club was toxic during those final days, when it was clear the Frenchman had run out of ideas and change was needed.

Now, a few weeks shy of 18 months in the role, Unai Emery is facing the same vitriol and contempt.

Granit Xhakas petulant but arguably understandable f*** off message to Gunners fans booing him shows how poisonous the atmosphere is at the Emirates.

Emery is becoming an increasingly divisive figure, with many fans and pundits slamming his lack of philosophy or vision.

His efforts to learn English quickly upon his arrival at Arsenal were admirable and could be blamed for early struggles.

But now the Spaniard converses well so there is no excuse for his players not being able to implement his plans unless, of course, the message is mixed in the first place.

Robin van Persie called out Emery on his blurred vision a couple of months ago and insisted he needed to form a structured game plan that suits Arsenals strengths.

Those are currently in attack with the likes of Pierre-Emerick Aubameyang, Alexandre Lacazette and Nicolas Pepe capable of being one of the best strike forces in the Premier League.

Was giving Granit Xhaka the captains armband ever going to work?

The scenes when the Swiss star was subbed off in the 2-2 draw to Crystal Palace suggested not.

Emery went to shake Xhakas hand as he walked off but it was batted away by a seething Xhaka who marched down the tunnel.

Emery could have put his personal authority on the side with his choice of skipper after saying five could do it but it has backfired spectacularly.

Do the club want him or not? Do they want to keep shelling out 350,000 a week on a guy who hardly plays?

Ozil recently committed his future to the Gunners but the most impact he has had of late is tweeting Ya Gunners Ya after a game.

The German World Cup winner has played twice this season and appeared to have a tense chat with Emery during a training session last week.

His contract is up in 2021. Arsenal cannot afford to make the same mistake they did with Aaron Ramsey and let him leave on a free.

It is telling that Emery explained part of the reason he has not been using fit-again Rob Holding and Hector Bellerin all that much is because he does not want a quick fix at the back of Arsenals leaky defence.

An instant improvement is exactly what the manager needs right now blowing a two-goal lead against Crystal Palace proves that.

And there was the failure to properly defend a corner in the tame 1-0 defeat to promoted Sheffield United.

Summer signing Kieran Tierney had to wait until last Sunday to make his debut. Give the fresh legs with added attacking impetus a chance.

Its a negative set up that works when everything blends perfectly but sometimes does little to excite fans.

Emery has genuine talents in Joe Willock and Ainsley Maitland-Niles and he has hailed his young stars including Gabriel Martinelli, Reiss Nelson and Bukayo Saka as exciting.

But he needs to know exactly where to play them and not punish them too harshly for mistakes like he did after the Europa League win over Vitoria.

Both Willock and Maitland-Niles subbed at half-time but fans argued their poor displays Maitland-Niles shocker let Vitoria in for their second came in part because they were being used in the wrong positions.

Or, at least, not given a chance to cement themselves in one position.

The result? Axed from the squad to face Crystal Palace.

Chelsea have shown possibly by force rather than choice owing to their transfer ban the value of trusting in youth.

Arsenal have also shown it works with the development of Guendouzi, show Emery should stick with it.