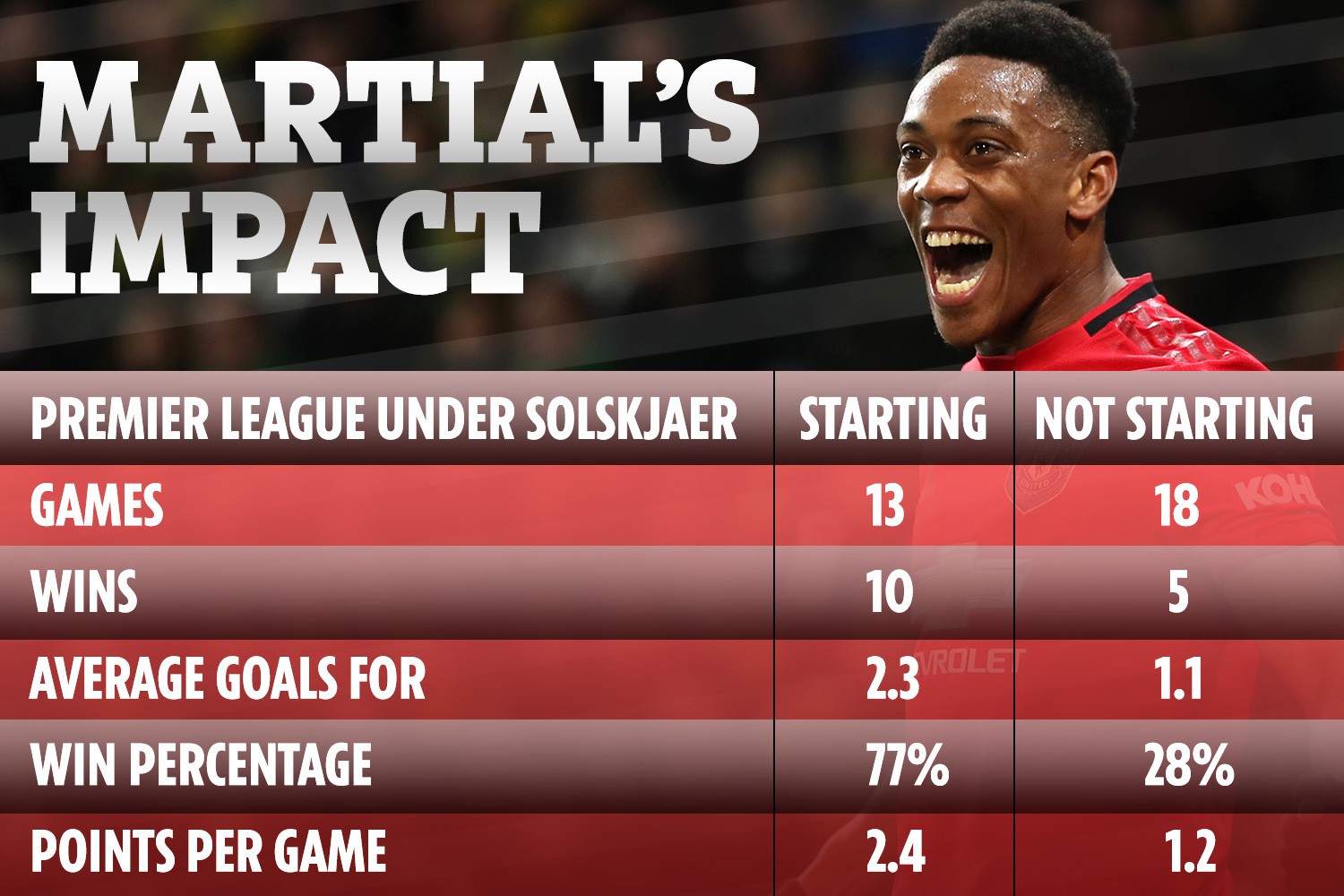 OLE GUNNAR SOLSKJAER couldn’t hide his excitement at welcoming Anthony Martial back into the Manchester United line-up following the 3-1 win at Norwich.

And a large part of that is that the Norwegian’s Premier League win rate as Red Devils boss is remarkably higher when he can start his French striker.

Martial, 23, marked his first domestic United start since August by helping the Old Trafford club record their first away win in the top-flight since February at Carrow Road.

The former Monaco star atoned for his own penalty miss by scoring his side’s third with a cute chip over Tim Krul and shone in his favoured central role.

On the importance of Martial, United boss Solskjaer said: Its vital for us. Hes a top striker and to have him back fit, smiling, enjoying his football thats a big thing for us.

Hes clever in his movement.

We feel Anthony is an important player for us and weve felt the effect of him not being there so of course, Im pleased to have him back and scoring goals.

And that stats show why Solskjaer is so pleased to have Martial back in his team, with United winning 10 from a possible 13 games when the France International starts.

That is a massive 77 per cent win rate compared to the paltry record of only five wins from 18 matches without the striker – which sees the percentage drop to just 28.

United – who have been criticised for their lack of goals this season – also see a boost in their average strikes per game from 1.1 to 2.3 when Martial starts under Solskjaer.

The Frenchman, who is now netted in United’s two biggest wins of the season against Chelsea and Norwich, has been getting hailed by fans on Reddit.

One wrote: “Did anyone notice Martial pressing a hell lot more than he has ever done? Also his hold up play was something we have been missing throughout this season.”

Another posted: “The commitment to pressing has seen a notable increase since pre-season. I feel hes really developing into a complete striker, just needs to stay fit and he can have a big big season.”

A third added: “At the end of last season I was getting really frustrated with him because he just didnt seem to put in the effort. But Im really appreciating what hes doing in the No.9 role.

“Thats where he has to play all the time, absolutely fantastic.”

But it’s less good news for Martial’s club and country teammate Paul Pogba, who won’t be able to make his United return until December.

The World Cup winner has not played for the Red Devils since September 30 when he aggravated an ankle problem againstArsenal.

Hell be out for a while. He needs time to fully, fully recover, so I dont think hell be back before then.

Maybe Sheffield United after the international break but it will probably be in December before you can see him.

Im not the doctor but there is an injury there that needs healing. It is the ankle rather than foot.