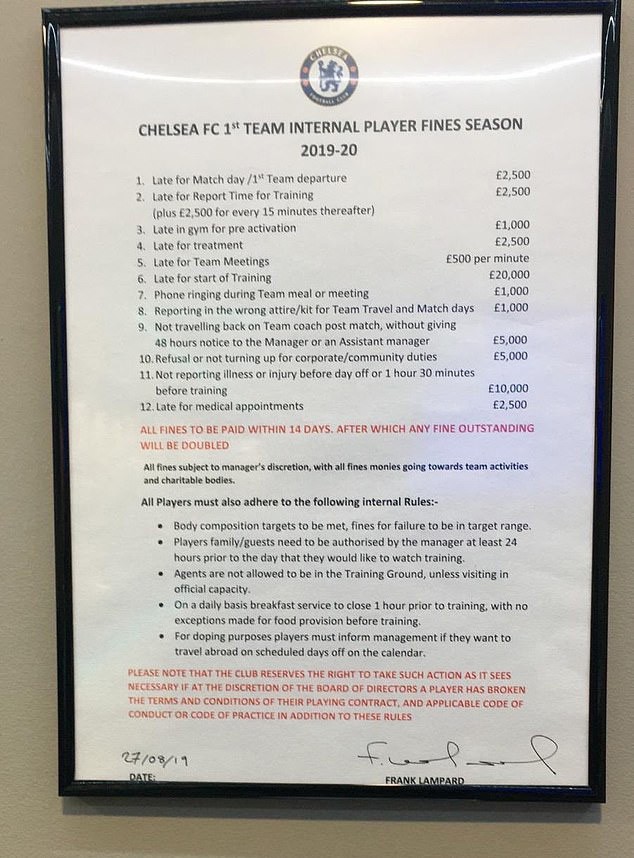 A list of the financial punishments in place at Stamford Bridge was shared online earlier this week.

Players get whacked with a 20,000 bill for being late to training and must fork out 500 for every minute they are late for team meetings.

Not reporting an injury costs 10,000 and allowing a phone to ring during a team meal or briefing will set a player back 1,000.

England and Chelsea winger Hudson-Odoi – who makes around 120,000-a-week – insists players always cough up but that discipline is in place anyway.

The 19-year-old said: “To be fair, we have a couple of fines where it’s pretty strict and we have to stick by it.

“But even if there weren’t fines, we would still be on point.

“All of us are very on time with everything that we do.

“We’re very positive about everything we do. If there is a fine, we will pay it.

“For the fines, we don’t really look into it because we are always on time for what we do so it’s OK. It’s there but we’re all good about it.”

Hudson-Odoi would have escaped Lampard’s fines altogether if a move to Bayern Munich had gone through last season.

The Germans were confident of landing the flyer to replace Arjen Robben.

But Lampards return to Stamford Bridge changed the course of history for the winger.

Hudson-Odoi, preparing for Englands Euro 2020 qualifier against Montenegro, said: “I had one conversation.

“I just had a conversation with him and then from there, I knew this is where I wanted to stay 100 per cent.

“And he wants me to play for him.

“They were encouraging signs for me that you want to hear from a manager, that he believes in me and has faith in me, that I can become a good player and achieve a lot of stuff at the club.

“I was excited. It was exciting times that a new manager was coming in and also you know that he will play at least some of the youth boys as well.”