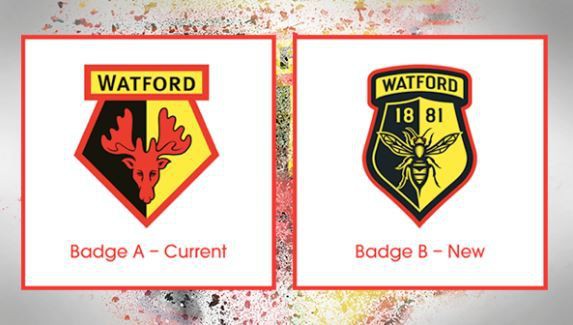 WATFORD fans sent in 4,000 designs for their new badge – but they will be sticking with their original.

The Hornets offered supporters the chance to design their own club crest for the 2020/21 season.

After being bombarded with ideas, the club and a fan panel managed to whittle it down to just 20 designs.

Watford supporters were asked to vote for their favourite – which was then put up against the current design.

The club have now confirmed that the original crest will remain in place after it received 60 per cent of the votes.

A statement on the club website read: “Following a lengthy and comprehensive process, in which you played an important part, we are pleased to announce that we will be retaining the current Watford badge, the final vote deciding this by a c60/40 margin.

“As such, there will be no change to next year’s kit and we have pressed the button on production.”

The original badge was up against a new design which featured a large Hornet and the date the club was founded.

But not everyone was happy with the outcome when Watford posted the result to their Twitter page.

One fan said: “I demand a second referendum.”

Another said: “Disappointing, the current badge would have never won if someone had only recently come up with it.”

Spencer Fields, the club’s Global Strategy and Partnerships Director, confirmed not every design that was sent in will go to waste.

He said: “The initiative has thrown up some opportunities for the club.

“In particular, we will be utilising one of the 4,000 designs for retail/merchandising purposes.

“Very few of you have seen the relevant design, as it was never suitable as the club’s official badge, but we think it will modernise our fashion range and we look forward to unveiling it in 2020.”