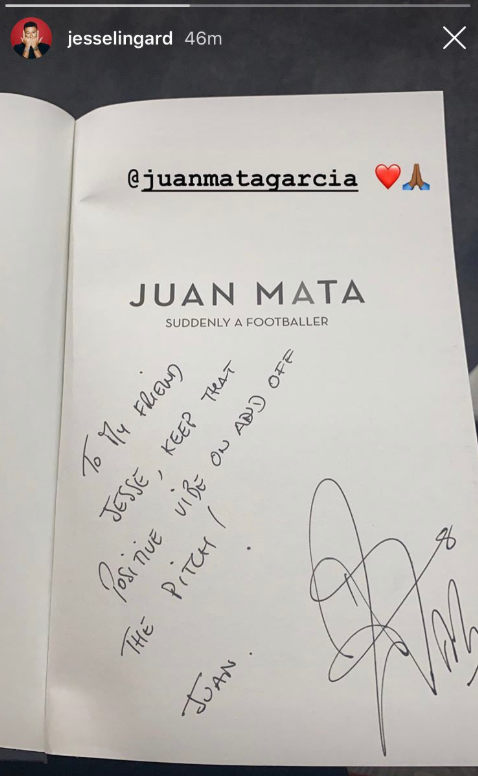 MANCHESTER UNITED players were in for a treat at training on Friday as Juan Mata handed them each a signed copy of his autobiography.

Not only did the Spaniard‘s teammates get the chance to read ‘Suddenly A Footballer’, they received a sincere message from their colleague.

The likes of Jesse Lingard, Victor Lindelof and Luke Shaw posted their notes from Mata on social media.

Struggling midfielder Lingard was praised for his attitude with the message: “To my friend Jesse, keep that positive vibe on and off the pitch!”

While Lindelof and Shaw earned plaudits for their ability on the pitch: “To my friend Victor, ‘Iceman’, my centre-back. Thanks for finding those great passes to me on the pitch, and for being such a good guy. I love Sweden!”

“To my friend Luke, you can be the best left-back in the Premier League. Believe it!”

For every copy of Mata’s autobiography sold, 99p will be donated to his Common Goal charity.

Summer signings Aaron Wan-Bissaka and Daniel James showed off their books on Instagram too.

Mata, 31, complimented both United players for settling in excellently while telling the right-back to “enjoy the journey”.

The message to James read:“To my friend Daniel, what a great start for us you had! Keep going, you will be a great success! You are a great guy!”

And Wan-Bissaka received:“To my friend Aaron, I’ve never seen anyone tackle as good as you do! You’ve started so well for us, keep going and enjoy the journey!”