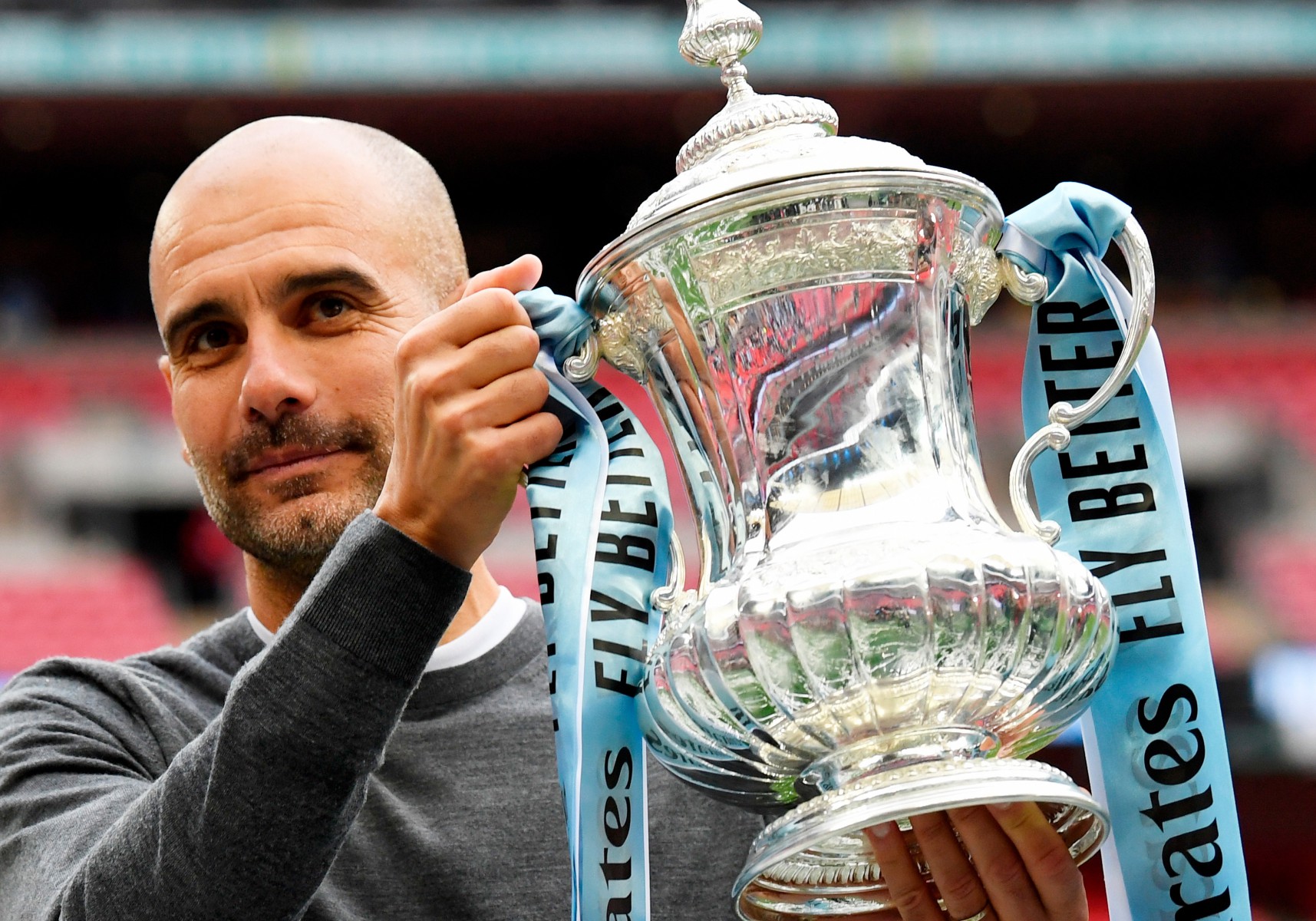 AFTER a bumper fixture list on New Year’s Day, attention turns to the FA Cup.

The first weekend of January traditionally hosts the third round in which Premier League and Championship clubs begin their challenge.

We’ve got tips from four huge ties, including one 16/1 shot that we fancy to get your 2020 off to the perfect start.

MOLINEUX is the last place anyone wants to go at the moment.

Wolves are playing with fire in their bellies and they absolutely love welcoming the Big Six to their intimidating home ground.

They tend to raise their game with the big boys are in town and we expect this occasion to be no different.

A trophy would do Ole Gunnar Solskjaer the world of good in a season which appears to have aged him ten years.

But instead of a plush home draw against League Two opposition – looking at you, Man City – his side have to travel to one of the toughest venues in the country.

They held Wolves to a draw earlier on this season in the league, with Paul Pogba memorably missing from the spot after taking the ball from Marcus Rashford.

When these two meet, it’s never boring – in those three meetings, there’s been SIXTEEN yellow cards and one red.

Expect another feisty cup tie under the lights.

We really fancy Wolves in this one considering the recent history, especially when you see them priced up at a juicy 27/20.

Despite their issues here though, United did manage to find the net on each of their three visits in 2019.

So although the 7/10 on both teams to score looks low, it’s a good fallback and a safer play than the result.

Anthony Martial is finding his form after a tough start to the season and continues to flourish with Dan James in and out of the team.

He’s a very generous 13/8 to net anytime and is our pick to score for the visitors.

Both teams to score at Molineux: 7/10

BEWARE of the Bridge.

Plenty of you will be using this game as a chance to top up your accas this weekend with a home banker.

But there’s no such thing with this Chelsea side under Frank Lampard.

Terrific on the road, but like rabbits in the headlights on home soil, the Blues have lost three of their last four Premier League games here.

Nottingham Forest are playoff chasing from the Championship and this is a repeat of a last season’s round three tie.

That finished 2-0 to Chelsea thanks to a brace from Alvaro Morata – what a difference twelve months make.

The Blues head into the New Year eyeing up an influx of new talent after their transfer ban was overturned.

Forest meanwhile have hit back from a poor spell with back-to-back wins which moves them back into the playoff hunt.

They went to the Emirates earlier this season in the Carabao Cup but were on the end of a 5-0 pasting – we don’t see that happening here.

Only on three other occasions have they conceded two or more on their travels and they’re a tough nut to crack, also possessing some exciting talent on the break.

Joe Lolley has shown he can cut it at Premier League level with Huddersfield and will relish the chance of taking a top-flight scalp.

Chelsea won’t have this all their own way and have conceded in their last five home matches on the spin.

Forest are a massive 16/1 to win and with the results that have been going on at the Bridge this season, that’s well worth 50p.

Lolley loves a shot and the goalscorer markets are a bit stingy for the Chelsea XI – plus we don’t know what sort of side Lampard will plump for.

Instead back the former Kidderminster man to add to his four goals this season and net on the big stage at a massive 5/1.

Joe Lolley to score at anytime: 5/1

CUP ties don’t come much better than this.

Three weeks ago, we’d be recommending you stick the mortgage on the Red half of Merseyside running away with this one.

Before Duncan Ferguson and then Carlo Ancelotti got hold of this Everton side, they were rudderless and on a collision course with the Championship.

Since Marco Silva’s departure, this expensively-assembled group of players has started to show signs of recovery.

They’re not there yet – and we’re not going to go as far as telling you to back a Toffees victory.

Stranger things have happened, but we can’t look beyond Jurgen Klopp’s juggernaut rolling on into the New Year.

Nobody in the country has a home record like Liverpool.

The Reds last lost a competitive game here in April 2017 – don’t be tempted by the rather low 9/2 on offer for the away win.

If you absolutely have to back Everton, go with the double chance at 6/4 as it’s far more likely they frustrate Liverpool and get them back over Stanley Park for a replay.

But we think Liverpool are a terrific price at 5/6 and one we’d happily recommend all day long.

They’ve won the last three derbies here and Everton haven’t tasted a victory on this ground since 1999.

We don’t usually get high-scoring games between these two, although the last meeting back in early December did see the defensive frailties of both sides in a barmy 5-2 win for the Reds.

Call us mad, but we don’t see another goal-fest – particularly with Ancelotti now in the opposing dugout.

Expect the Toffees to try and take this one long and the under 2.5 goals at a solid 29/20 is tough to ignore.

Ladbrokes run a market where you can wager on the result after 15, 30 and 60 minutes.

It’s a tempting 3/10 for the game to be a draw after 15 minutes, which would have won in four of the last five Merseyside derbies at Anfield.

In a game where Everton will look to keep things tight and go from there, that’s real value.

THIS could very well be a Premier League fixture next year.

That is if Arsenal stop their slide down the league table. Joking.

Leeds under Marcelo Bielsa are in pole position for a return to the top-flight for the first time since 2004 – and it’s a very different place to when they left it.

The Whites play a terrific, high-octane 3-4-3 under the Argentine, which has seen them occupy the automatic promotion places for most of the campaign.

How that style works in the top-flight though is a complete mystery – so this will be a good test for both Leeds and their long-suffering fanbase.

Arsenal are Arsenal, where do you start?

Mikel Arteta is now at the helm and silverware would be a welcome distraction from what has been a pretty horrendous season at the Emirates.

But this is a very tricky tie and the Spaniard would have hoped for something easier on home soil.

It’s got shock written all over it – remember Jermaine Beckford netting infront of the Stretford End back in 2010? Yep, that level of shock.

Prime time viewing on BBC, Leeds will want to put on a show.

And the over 3.5 goals is in serious play here – we’re expecting fireworks.

Arsenal simply can’t defend and the Whites shipped four at Birmingham just last week. Crank that one up with confidence at 6/4.

There’s absolutely nothing wrong with the 4/1 on a Leeds win, but it shows how bad Arsenal have been this season that it’s that low against a side from the Championship.

For comparison, Nottingham Forest were 16/1 to beat Chelsea.

In a game where we can guarantee goals, an away victory at 13/2 with both teams scoring seems of more value.

Seriously, this could end up as anything – but with thousands flocking down from Yorkshire, we reckon this might be a dress rehearsal that ends in smiles for the men from up north.

But just in case you’re not willing to trust the Championship club fully, a punt on Leeds to win either half at 17/10 is the sensible bet of the night.

Yorkshire side to win either half: 17/10

Leeds to shock Arsenal with both teams scoring: 13/2