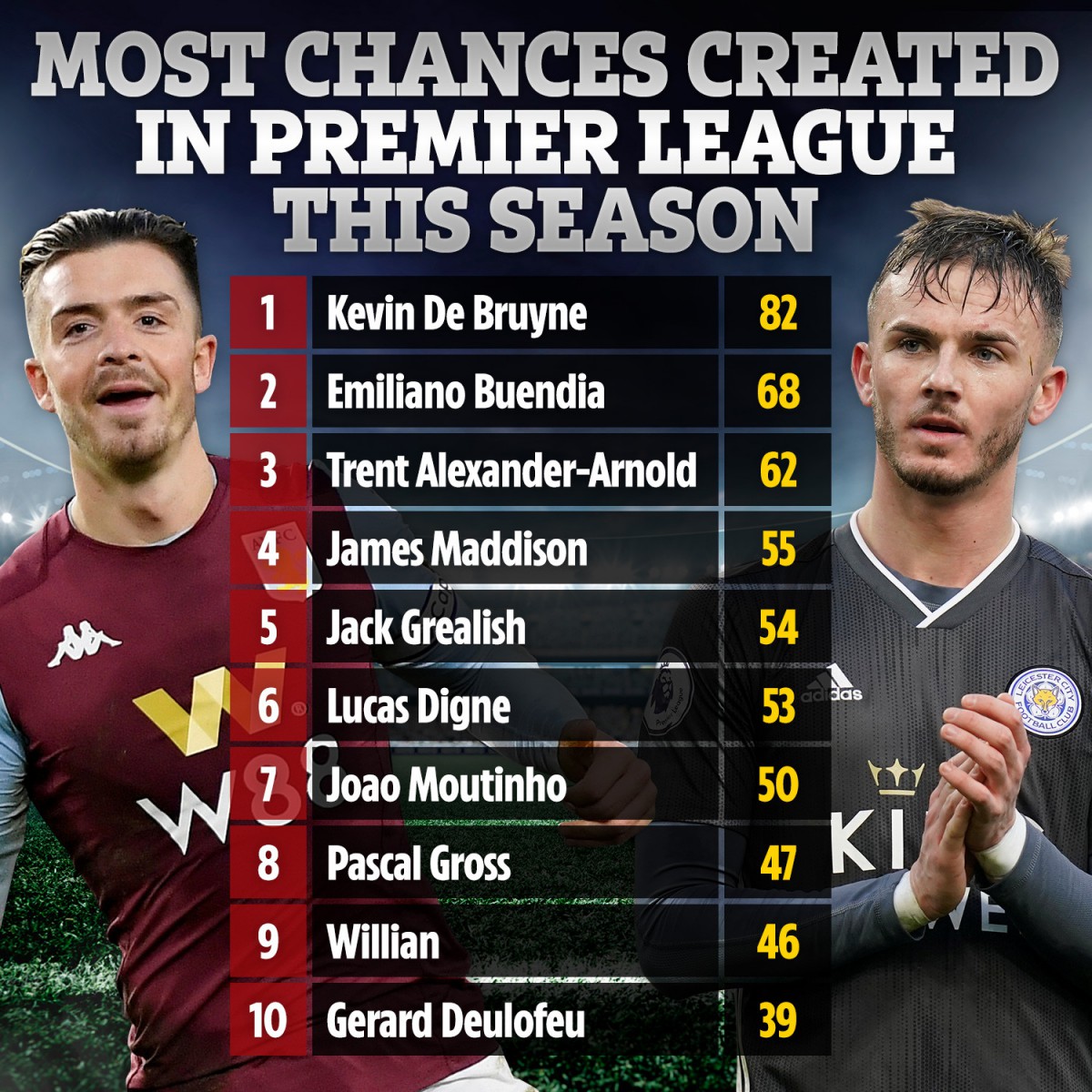 RYAN GIGGS has urged Manchester United to make a move for Jack Grealish or James Maddison this month.

The Old Trafford veteran insisted the pair could “unlock the door” to allow Ole Gunnar Solksjaer’s strikers to thrive – and statistics have backed up his claim.

United are five points adrift of the top four this season after winning just nine of their 23 league games.

Solskjaer is keen to bolster his squad across all areas of the pitch, but Giggs urged him to strengthen the No10 role.

Incredible new statistics show the impact that the two young English star’s have had for their teams this season.

Maddison has created a whopping 55 chances for the Foxes this term – which is the fourth highest of any player in the league.

And England Under-21 star Grealish has created 54 – which is the fifth highest.

United have lacked an influential figure in the midfield this campaign as Paul Pogba has endured lengthy stints on the sideline.

Andreas Pereira has created the most chances for the Red Devils with 30 – which makes him the 26th highest in the league.

Manchester City’s Kevin De Bruyne leads the race with 82, while Norwich ace Emiliano Buendia has 68 and Trent Alexander-Arnold has 62.

Both Grealish and Maddison fit the bill for United as they are young English talents that have already proved their potential on the main stage.

And Giggs has urged Solskjaer to put them firmly at the top of his wish-list this month.

Speaking about Solskjaer’s situation at Old Trafford, he told beIN SSPORTS: “I don’t think he’s got the players.

“I think he’s probably a couple of players short in actually changing that way of playing.

“That No10, that focal point and also a midfielder. Whether Pogba’s that, he’s been so inconsistent.

“Obviously on his day he could be that player.

“But they’re missing a Grealish or a Maddison, a player like that which can unlock the door.”

SunSport exclusively revealed that Solskjaer’s job is safe – even if the Red Devils miss out on Europe.

Giggs claimed the club need to give the manager time as he said: “I think it suits because of the pace we’ve got.

“It suits the way they play and also, when you come up against good teams, they like to dominate possession. We haven’t got the players.

“Ole has got rid of [Alexis] Sanchez, [Romelu] Lukaku and not really replaced them because for whatever reason the player isn’t out there. He hasn’t fancied a player.

“Now he needs to go again a couple and get them players in where you can maybe tweak the way that you play.”

Alan Shearer admitted he would be “amazed” if Foxes star Maddison completed a move to Manchester this month.

He told Coral: “I totally understand why, if it’s true, Manchester United want James Maddison because he’s a very, very good player. But I would be amazed if Leicester were to let him go in this transfer window.

“The way things are going at Leicester, the way he’s playing, what is at stake for Leicester… I cannot see them letting one of their top players go this January.”