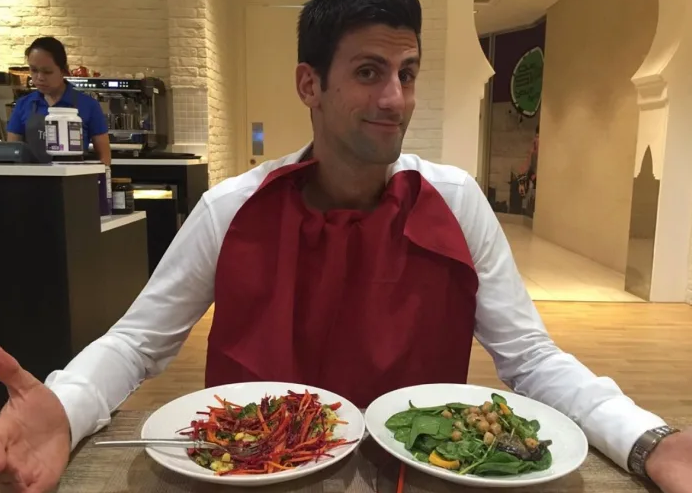 NOVAK DJOKOVIC has revealed he has cut out meat entirely from his diet – and why he signed up for hit documentary Game Changers.

The Australian Open contender follows a plant-based diet but does not like to be labelled a vegan.

Djokovic, 32, has a gluten allergy plus an intolerance of dairy and refined sugars.

That is in contrast to rival Rafa Nadal, who put his success down to toast and yogurt in the mornings.

Djokovic’s parents used to own a pizza restaurant and he ate there so regularly he would even have a side of bread with his slice of pizza.

But the 16-time Grand Slam champion noticed he felt exhausted near the end of gruelling matches or tournaments and suffered a dip in form as he got older.

That prompted a change in his diet and a role as executive producer alongside the likes of Lewis Hamilton in the film Game Changers.

Quizzed on why he decided to be filmed for the movie, Djokovic said: “Well, they reached out to me almost when the movie was done. I wasnt very vocal about being a plant-based athlete.

“They heard that during Wimbledon last year when someone asked me in the press conference. They wanted me to be a part of it.

“I was definitely very happy to be part of a very impressive group of people, from sport, the movie industry, different fields of life, very successful people who are eating plant-based, being healthy, happy and successful in what they do. That is what it is all about.”

Djokovic’s diet means so much to him he opened vegan restaurant Eqvita in Monte Carlo in 2016.

Speaking of his diet being key to his success, the reigning Wimbledon and Australian Open champ said: “Because of my family, Ive always had a love for food.

“But as an athlete, it became something morethe fuel that determines how I play, how I recover and how alert I am on the court.

“I attribute a great deal of my professional success to my diet.”