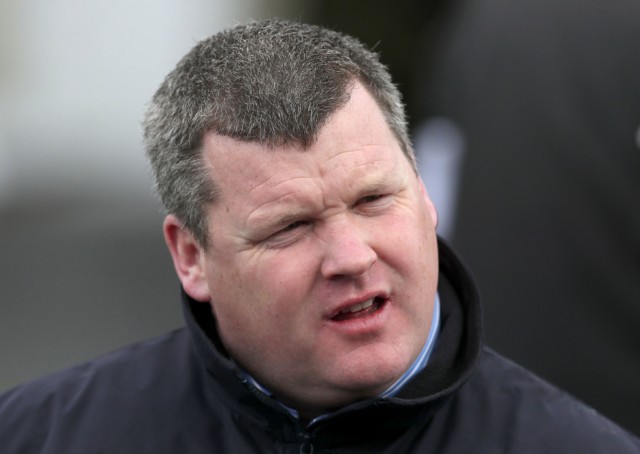 GORDON ELLIOTT has been banned from racing horses in Britain amid the probe into his shocking dead horse photo.

The British Horseracing Authority will not allow the three-time Grand National winner to saddle runners until the probe is completed.

Elliott has been banned from racing horses in Britain

Elliott, one of the top trainers in the sport, has been banned just two weeks before the start of Cheltenham Festival.

A BHA statement read: “The BHA, which regulates racing in Britain, will use powers under its own rules to refuse to allow horses trained by Mr Elliott to race in Britain pending consideration of the outcome of the Irish investigation.

“The action taken by the BHA recognises that Mr Elliott is licensed in Ireland, whose regulatory body, the IHRB, is carrying out its own investigation.

“However, Mr Elliott has entered horses to race in Britain, from which point the British Rules of Racing apply to him.

“The decision to refuse to allow horses trained by Mr Elliott to run in Britain is therefore an interim decision which the BHA regards as proportionate in these circumstances.”

Horses trained by Elliott won four races at Punchestown in Ireland but social media users blasted the timing of the message as the probe into the photo continued.

The BHA had previously labelled the photo – which shows Elliott sitting on the body of a dead horse, phone in one hand and doing the peace symbol with another – as ‘appalling’.

An earlier statement read: “The BHA is appalled by the image that appeared this weekend.

“We expect all those in our sport to demonstrate respect for horses, on the racecourse, in the training yard, on the gallops, and wherever they have horses in their care.

“People who work in our industry believe their values – of caring for and respecting our horses – have been deeply undermined by this behaviour.

“On their behalf, and on behalf of all horse-lovers, we say unequivocally that British horseracing finds this totally unacceptable.”