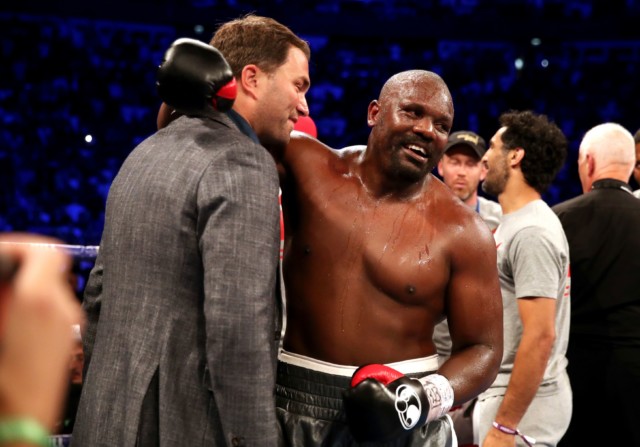 DEREK CHISORA has hit out at the standard of officiating in Britian following Zelfa Barrett’s wide points win against Kiko Martinez.

The heavyweight star has criticised the ‘shambles’ scorecards after a battered and bruised Barrett was somehow awarded the victory against the Spaniard.

Derek Chisora has criticised the standard of British boxing judges

Commenting on last month’s decision, Chisora told talkSPORT: “I think boxing has changed. You know, as fighters we fight and we train hard.

“But when guys wake up and go from their house and go to the side of the ring and wear their glasses and have a cup of tea.

“Then they start judging when these guys are going at it, toe-to-toe.

“And then they give those kind of shambles scorecards? That is bad.”

Matchroom promoter Eddie Hearn also hit out at the judges awarding Barrett the win, despite the super-featherweight competing under his banner.

Fearing decisions like that may stop boxers from fighting in the UK, Hearn said: “It was very close but 118-111 is absolutely disgusting for Martinez.

“How will we bring world-class fighters to this country with scorecards like that?

“After all that effort Martinez might as well have boxed off his back foot and had an easy night.”

Chisora – who hasn’t fought since being outpointed by Oleksandr Usyk in October – has been called out by Joseph Parker.

Taking to Twitter after his victory against Junior Fa, he tweeted: “Haha @DerekWarChisora getting cocky are we?

“You’ve barely fought out of the UK, never out of Europe, and scared to visit New Zealand!

“Come down to NZ if you think you’ve got what it takes donkey.