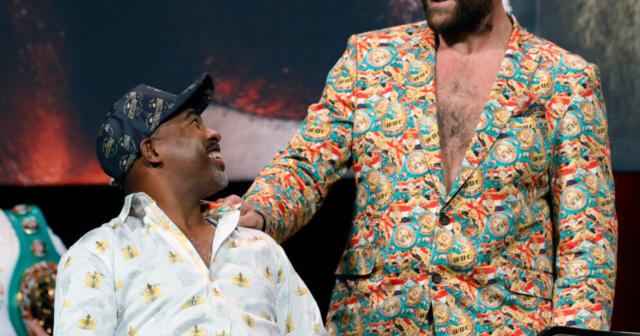 TYSON FURY’S trainer SugarHill Steward is not against his fighter teaming up with Anthony Joshua to help his rival overcome Oleksandr Usyk.

The Gypsy King was supposed to do battle with Joshua in the summer, only for his Deontay Wilder trilogy bout to get in the way.

Rival AJ was then beaten by Oleksandr Usyk in September, leaving plans of an all-British unifier in tatters.

Fury, 33, then took the unusual step of offering to help Joshua ‘fight like a big man’ ahead of his rematch with the Ukrainian, likely to take place in the spring.

And Steward thinks it could be a good idea.

The American told talkSPORT: “I mean, you look at the situation here,.

“You got guys that are friends or very competitive champions, and you see people now, put together teams.

“They’re putting together dream teams or things like that, as far as basketball or football or anything other kind of sport like that.

“These guys are joining up with each other, playing for the same team, to be successful.”

Joshua accepted Fury’s offer last week, telling iFL TV: “Yeah lovely mate. If he takes no money for it. I don’t know if he’s after a quid or two.

“He’s more than welcome to come through the doors, he can even spar with me as well. I need a coach that’s lived it, breathed it, so it’ll be perfect.

“That’ll be the easiest way to get him in the ring. I’ll set up a camera, Eddie [Hearn] will be there with a few cameras running it on Facebook or YouTube.”

Joshua, a keen boxing historian, has no fears in welcoming Fury into his camp.

He said: “I’m seeing pictures with Sugar Ray Robinson, Joe Louis, Archie Moore, Muhammad Ali, all sitting together, in each others training camps.

“I feel like I’ve been tucked away a lot. Come into my training camp, come and see what the heavyweight champion gets up to.

“Tyson can definitely come and watch me train, 100 per cent.

“Sparring ain’t fighting, so he can definitely come in, he’s more than welcome to step in to the gym and give me some tips.

“I’m not fighting him next anyway so he ain’t got nothing to worry about.”