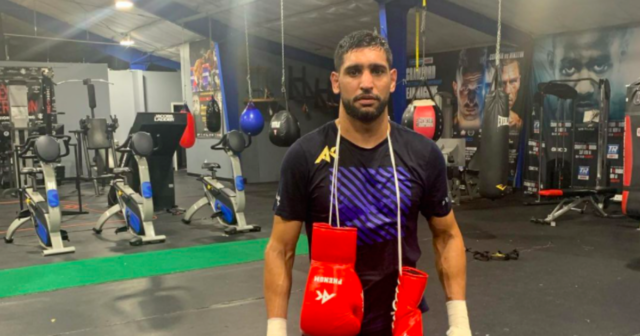 AMIR KHAN has hinted at sensationally making a U-turn on his retirement plans after finally fighting Kell Brook.

Khan revealed he is in the middle of the most gruelling training camp of his life as he prepares for his long-awaited grudge match with Brook.

He had admitted it would be the finale fight in his illustrious career and said he would be ‘done’ with the sport afterwards.

But now, having pushed himself to the limits in camp with new coach Brian McIntyre, Khan claimed there could still be more to come.

He told SecondsOut: “Let’s see where it goes. Because look, I’m going to see how this training camp makes me as a fighter.

“I mean, I might feel so good that I might want to do another one. I’ve never been pushed this hard in my career in any training camp.

“Training this hard, I know I can do it. And if I felt a little bit old that I had to retire, or felt beaten up, I wouldn’t have done it.

“I’ve been running with guys that are younger than me, who are like in their early 20s, out-sprinting them and beating them.

“And my times are better. A lot of the younger guys when I’m running the hills. I’m sparring well, I’m throwing more punches than fighters younger than me.

“So I don’t know. There’s nothing telling me I should call it a day yet.”

Khan, 35, is now being trained in Colorado by McIntyre, the man who cornered Terence Crawford, 34, to a win over the Bolton hero in 2018.

He is even now sparring with former opponent Crawford, who also has a win over Brook, 35, making him the perfect advisor in the camp.

So it leaves little left for him to prove heading into his 40th fight.

Khan is also currently away from wife Faryal and his three kids, Lamaisah, sevenm Alayna, three, and Muhammad Zaviyar, one.

And he admitted hanging them up on his own accord, instead of being brutally forced out of the sport, will always be on his mind when making a choice on his fighting future.

Khan said: “I always said that I never want boxing to retire me, I want to retire at the right time. I just don’t know.

“I’m going to see how this training camp goes because I feel that, if we get a really good win off the Kell Brook fight, then it might open a new chapter in my career.

“Let’s just see. But like I said, I don’t want to be too greedy because you’re always that one punch away from getting hurt.

“I’ve got a family and I’m going to wait and see after the fight what I do.”

Amir Khan and Kell Brook ahead of their February 19 fight
Advertisement. Scroll to continue reading.
In this article:heis, inthemiddle, retirementplans