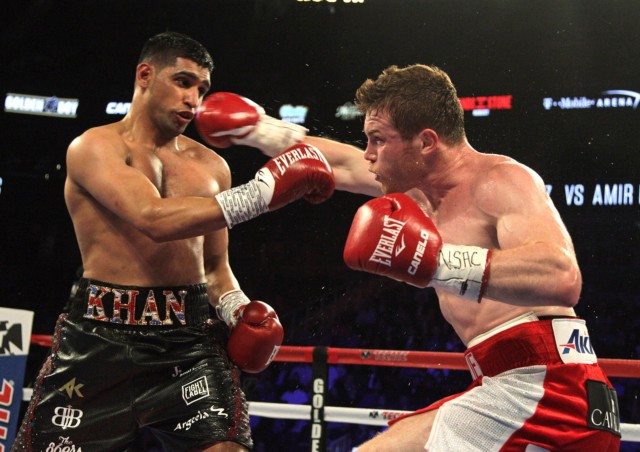 AMIR KHAN revealed Canelo Alvarez’s punches are like “being hit with a baseball bat” due to the Mexican opting to wear thinly but legally padded gloves.

Khan jumped from welterweight to challenge for Canelo’s WBC middleweight title in 2016 – despite the fight taking place at a catchweight 155lb, below the usual 160lb limit.

The Bolton hero raced to an early lead against the significantly bigger Alvarez, before being brutally knocked out in round six with a devastating right hand.

But he has since claimed Canelo‘s choice of gloves, the Everlast MX, contributed to the knockout.

The 2004 Olympic silver medallist admitted he would not be able to wear the gloves because his hands are too brittle, though he would have had the choice to as the Nevada State Athletic Commission deemed them perfectly fine to wear.

Khan, who opted to wear a different type of Everlast glove, told FightHype: “Every glove is different. When I fought Canelo, he had the Everlast horsehair gloves on.

“When I put my hand in, it was like pushing to the wall, but you’re going to damage your hand as well.

“They were solid. It was like being hit with a baseball bat. The foam padding ones, the shape always stays the same. With the horsehair, it fades more towards the back of the hand.

“So that way, your knuckles are more visible. Without padding in the way, that’s going to put more pressure on your knuckle. So you’re going to be hit with a bare hand.

“I could never do that because my hands aren’t strong enough to do that. I’d break my hand if I fought like that. Some fighters have the hands where they could punch through a wall and wouldn’t break their hands.”

Khan, 34, has called for boxing commissions to demand both fighters wear the same glove.

Floyd Mayweather refused to fight Argentinian puncher Marcos Maidana due to the custom Everlast MX gloves he picked to wear in their first bout in 2014.

Mayweather got his way and former Khan opponent Maidaa was forced to pick a different pair.

Khan admitted a boxer’s choice of tools can be a tale-tale for what their gameplan could be in the fight, indicating a pair of Cleto Reyes, for example, could suggest the boxer is aiming for a knockout.

He explained: “When you’re fighting someone, and you know they’re wearing a certain glove, you know what their game plan is.

“You’ve got guys that aren’t really punchers, and they’re going to wear the smaller Reyes gloves. You think this guy is going to try and knock you out. I’m going to have to be smart in this fight and be prepared.

“Then you’ve got Canelo, who is wearing the MX gloves, and they’ve got nothing in them. I knew that he was just looking for that one big shot. You know the mentality from the type of gloves they’re wearing.”

Did you miss our previous article…
https://www.sportingexcitement.com/boxing/boxing-legend-carl-froch-believes-earth-is-flat-and-slams-fake-nasa