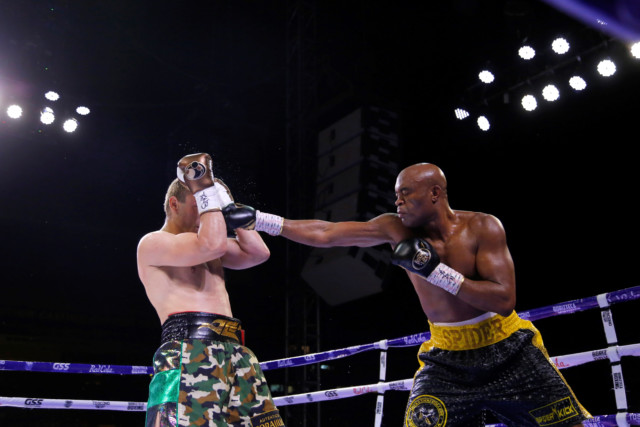 The UFC legend scored a shock upset as he outpointed son of a legend Chavez Jr in Mexico.

It was only the Brazilian’s third professional boxing bout, and his first since 2005.

Silva, who was released by the UFC last year after his third straight loss, vowed to fight on after his crossover win.

And he is targeting Paul, who just took Floyd Mayweather the distance in their exhibition bout, or the YouTuber’s brother, Jake.

Silva, 46, told MMA Junkie: “I respect both. I have a great relationship with both brothers, and yeah, I think this is possible, too.

“The people like to talk a lot about the guys, but they’re very good people. I respect both, and I respect the sport. I think everything’s possible.

“I think it’s the next fight may be with Logan Paul, maybe.”

Jake, 24, is 3-0 in his career and most recently knocked out retired UFC welterweight Ben Askren, 36, in April.

He tweeted: “Respect to Anderson Silva @spideranderson on the win….

“Would be an honor to have him vs Roy Jones Jr on the same card as Tyron and I.”

Silva and boxing great Jones have long been linked with a fight against each other but the UFC contractually permitted the move.

Now, both veterans are free to finally share the ring, after Jones, 52, made a comeback of his own last November, drawing with Mike Tyson.

Tyson, 54, also plans to fight again, and was recently called out by Paul, 26, who to the shock of many took Mayweather, 44, the full eight round distance.

Advertisement. Scroll to continue reading.
In this article:andersonsilva, itwas, juliocesar