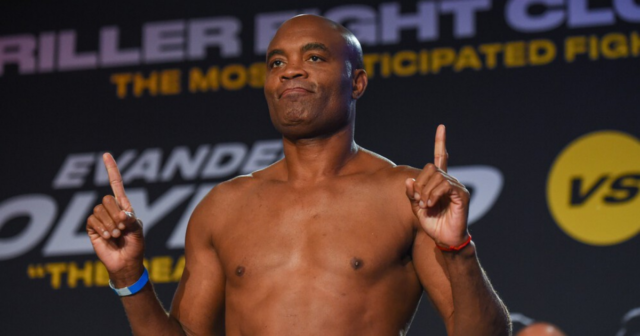 But now the UFC middleweight icon wants to jump to the top of the sport and challenge one of boxing’s best ever, 50-0 Mayweather.

Silva’s trainer Luiz Dorea told AG Fight: “I think the one fight that should happen was between Floyd Mayweather and Anderson Silva.

“Floyd faced Logan Paul, who doesn’t have that much experience in boxing, in an exhibition match. I think I could have a deal.

“These fights against YouTubers can happen too, because Anderson wants something that motivates him. We will have good news soon.”

Mayweather, 44, officially retired as a professional in 2017 after beating UFC superstar Conor McGregor, 33, in ten rounds.

But only this June he returned for an exhibition bout against YouTuber Logan Paul, 26, which ended without a winner after no KO was scored.

And Silva now wants to prize the American back into the ring, and smash the 4.6m PPV record he shares after his 2015 win over Manny Pacquiao, 42.

Dorea said: “It’s my wish and his. We have great respect for Floyd Mayweather and he is one of the greatest boxing athletes in history.

“He tested himself against a YouTuber heavier than him, so why not Anderson Silva? It would break all pay-per-view records.

“We would like to do. It has everything to do.”