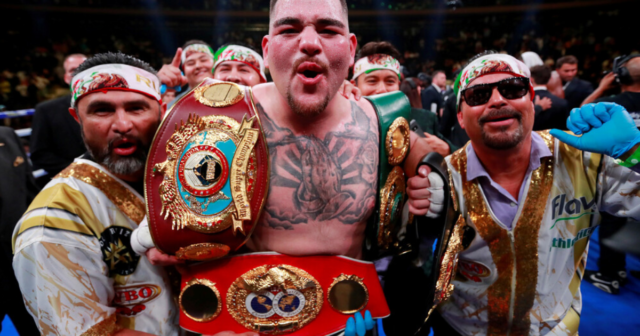 ANDY RUIZ JR is in talks to fight former world champion Charles Martin – who is trained by his ex-coach Manny Robles.

Manny Robles, left, pictured next to Andy Ruiz Jr
Charles Martin, sat down in the middle, is trained by Manny Robles

But six months on and the underdog champion ballooned up to 20STONE and appeared to lose all control and discipline.

Ruiz, 31, was then beaten by Joshua, also 31, in their Saudi Arabia rematch and fired Robles afterwards.

He has since linked up with Canelo Alvarez’s esteemed coach Eddy Reynoso and beat Chris Arreola, 40, in his comeback fight in May.

The American is most commonly known for losing against Joshua in 2015, twice being floored and failing to beat the count the second time.

Since then, he has won five of his last six, losing only to Polish prospect Adam Kownacki, 32, in 2018.

Martin has since risen the heavyweight ranks but most interestingly, he is trained by Robles, the man Ruiz dumped.

The trainer has since spoke out against his former pupil and the lack of concentration shown after winning the heavyweight titles.

Robles told MyBettingSites:“After that I don’t know what happened, he’s acting like he won the damn fight.

“I did the best I could under the circumstances, I showed up everyday. I decided to take the camp to Mexico to get him away from his new friends.

Did you miss our previous article…
https://www.sportingexcitement.com/boxing/muhammad-alis-grandson-says-tyson-fury-would-lose-to-his-iconic-grandad-but-reveals-gypsy-king-is-an-inspiration