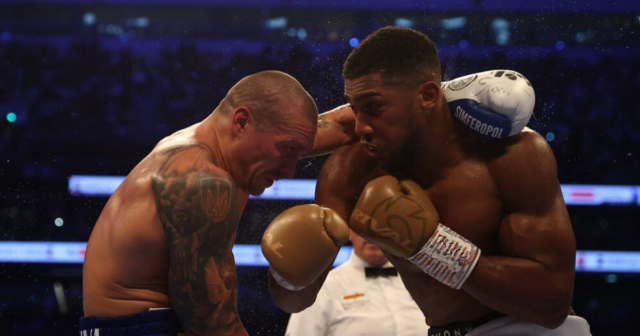 The two heavyweights went toe-to-toe from 12-rounds in front of a sold out 63,000 fans at the Tottenham Hotspur Stadium.

The Brit lost three of his world titles after being shocked in a unanimous points loss to the Ukrainian.

And the Voluntary Anti-Doping Agency (VADA) have confirmed both fighters samples have come back clean.

Joshua and his opponents usually enrol on a ten to 12-week testing programme before a fight.

That saw a previous scheduled opponent Jarrell ‘Big Baby’ Miller miss out of a shot at the ex-Olympic gold medallist.

Joshua went on to fight Andy Ruiz Jr, who shocked him and knocked him out at Maddison Square Garden.

The Watford slugger went on to avenge that defeat, schooling the Mexican over 12-rounds in the Saudi desert.

Those two fights, along with his next against Kubrat Pulev at the o2 Arena were all clean encounters.

Meanwhile, Joshua has revealed in the past how drug testers follow fighters everywhere when they turn up.

He said in the past: “The testers follow you everywhere when they turn up, even when you (gestures urinating).

“They jump in the car with me to Nando’s, I can’t drive on my own. It’s hard, to manage your whereabouts, it’s quite annoying.”