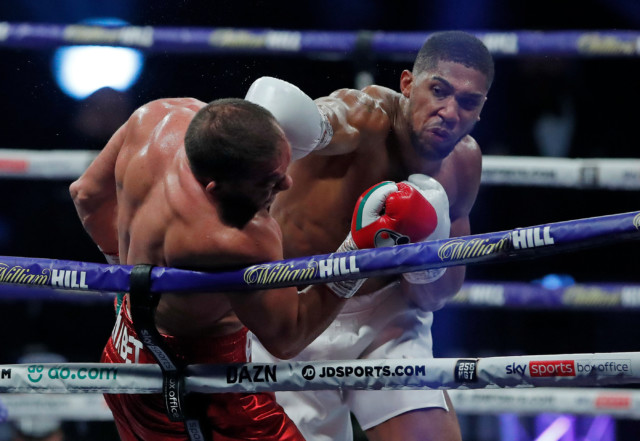 ANTHONY JOSHUA banked around £10million from his win over Kubrat Pulev… but missed out on an extra £8m in gate receipts.

AJ delivered a stunning ninth-round knockout to the Bulgarian to successfully defend his WBA, IBF, WBO, and IBO titles at Wembley Arena on Saturday.

Anthony Joshua banked around £10million for his win over Kubrat Pulev

1,000 fans– including Floyd Mayweather – were in attendance to watch Joshua set up an all-British unification showdown with Tyson Fury.

And SunSport can reveal that there were no set purses for AJ’s fight with Pulev, but it is believed the Watford hero will have earned around £10m.

His European rival, who now has two defeats on his professional record, is expected to have banked in the region of £3m.

Pulev revealed earlier this year that he would donate half of the purse he received for facing Joshua to Covid-19 medical workers.

The pair were both in line for larger paydays when they were originally set to meet at the 62,303-seater Tottenham Hotspur Stadium in June.

That would have seen AJ pocket £8m just in ticket sales but the fight was postponed due to the coronavirus pandemic.

But his undisputed clash against Fury has already been revealed to be a 50-50 split.

Speaking after dispatching Pulev, Joshua confirmed that he has set his sights on stepping in the ring with the Gypsy King next year.

“Whoever has the belts I want to compete with. If that is Tyson Fury, let it be Tyson Fury.”