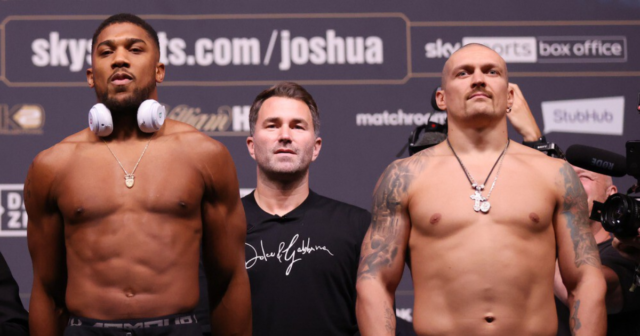 ANTHONY JOSHUA could be forced to vacate one of the world title belts if he beats Oleksandr Usyk.

The Watford boxer suffered his second defeat as a pro when he easily lost on points to the Ukrainian in September.

The pair have agreed the rematch, with the finer points of where and when still to be thrashed out.

If AJ somehow manages to find a way to beat Usyk, it could bring back the dream Tyson Fury clash.

But that might not be for ‘all the belts’.

The WBA could push for their mandatory man, Robert Helenius, to get his shot at the title.

That could mean AJ gives up that belt to sign the multi-million pound fight against fellow Brit Fury.

“Robert fought a WBA elimination bout in March 2020 against Adam Kownacki, and he placed a stamp on that victory in the rematch on October 9.

“Usyk should really be Robert’s next bout.

“We will do what is necessary to assure Robert’s rightful position as Usyk’s next WBA mandatory.

“In the end, of course we have respect for [president] Gilberto [Mendoza] and the WBA, and we think that ultimately they will do the correct thing and formally order Robert as the next mandatory.

“The WBA mandatory is due next, and that must be Robert.”

The WBA are likely to allow the Joshua-Usyk rematch to go ahead before pushing for Helenius to fight the winner.

Joshua, meanwhile, is enjoying some down time Stateside after his recent defeat.

The 32-year-old is touring some big-name gyms in the hope of adding more weapons to his arsenal.

And after training with Mike Tyson’s old coach Ronnie Shields, he has told the American to ‘turn him into a dog’ for the big rematch.

If Joshua somehow finds a way to beat Usyk, he could focus on getting the Tyson Fury fight finally nailed down

Did you miss our previous article…
https://www.sportingexcitement.com/boxing/logan-paul-leaves-plush-mayfair-restaurant-with-mystery-ladies-before-heading-to-celebrity-hotspot-tape-nightclub