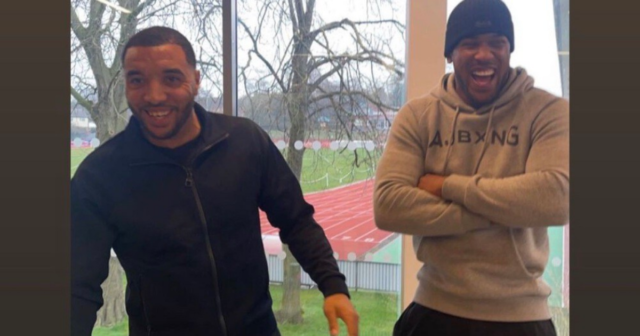 ANTHONY JOSHUA was snapped hanging out with footballer friend Troy Deeney as he awaits his return to the ring.

The former world heavyweight champion was planning to rematch Oleksandr Usyk in the first half of 2022 as he looks to avenge his defeat at the Tottenham Hotspur Stadium in September of last year.

This photo of the pair was posted on social media

But Usyk is now serving on the front line for Ukraine as they fight off Vladimir Putin’s Russian invasion.

And Joshua could take an interim bout while he waits for a second shot at the Ukrainian champion.

On Friday though, he took some time away from training to hang out with Birmingham City striker Deeney.

Deeney, who regularly writes a column for SunSport, spent 11 years playing at Watford – the hometown of boxer Joshua.

They met in a barbershop when they were both having their hair trimmed.

And the pair were pictured chilling with one another as they enjoyed some downtime, with Joshua captioning a photo of the two: “Deeney in the building.”

To which Deeney responded: “Boss man appreciate the hospitality,” before adding: “Always vibez with the big fella (sic.)”.

Meanwhile, earlier this week Joshua’s promoter Eddie Hearn confirmed for the first time that they were open to taking another fight before the Usyk rematch.

Speaking on The MMA Hour, Hearn said: “It’s difficult to speak on behalf of Oleksandr Usyk.

“Firstly, my thoughts are with everybody in Ukraine and people showing incredible bravery out there, particularly some of the great fighters of the past and Oleksandr as well.

“He can have the time that he needs. We [Joshua’s camp] don’t want any other fight but Oleksandr Usyk.

“Whether there’s a delay for that fight and we have an interim bout, I guess that’s subject to the situation with Oleksandr Usyk and how much time he needs.

“It’s a very emotional time and personal time for the people of Ukraine. So we’ll respect them and give them all the time, but we wouldn’t be looking to get out of our obligation, is what I’m saying.

“The only fight AJ wants right now is Oleksandr Usyk. If we have to fight in between, no problem at all, but we’ll respect this time for Oleksandr Usyk and speak to his advisers.

“If there needs to be a delay for the contractual period, we will be happy to grant that, but we want that fight.

“We don’t want that obligation to slide away.”