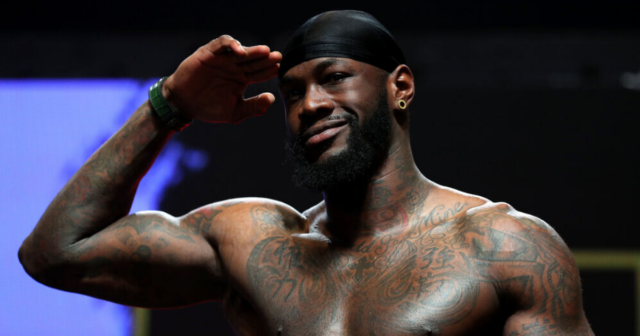 DEONTAY WILDER is Anthony Joshua’s top choice of opponent if the Oleksandr Usyk rematch falls through.

The pair were scheduled to fight in the first half of this year as AJ bids to win back his world titles.

Deontay Wilder is top of Anthony Joshua’s shortlist if the Oleksandr rematch falls through, according to promoter Eddie Hearn

But that is unlikely to happen after Usyk returned to his homeland of Ukraine to fight in the front line against the Russian invasion.

Now, according to Joshua‘s promoter Eddie Hearn, there are FOUR potential opponents on the shortlist.

And Wilder, who is still considering his future in boxing after two crushing defeats to Tyson Fury, is top of the pile.

Speaking to iFL TV, the Matchroom boss said: “We’ve got to look at the opponents.

“AJ was talking last night about Luis Ortiz, Otto Wallin – a southpaw, the same as Usyk, might make sense.

“I think if you said to AJ right now, ‘Who’s your top choice?’ I think he’d probably go for Deontay Wilder.

“It’s not an interim fight, let’s be honest. One thing’s for sure, he’ll be fighting a top ten heavyweight, a world ranked heavyweight.”

And in a Q&A with DAZN, Hearn also hoped that Wilder stays in the sport to set up a potential clash against his man.

He said: “Anthony Joshua has proved time and time again he’ll fight anybody.”

“A great fight if Wilder stays in the sport, I believe at some stage that fight will happen.”

Wilder is taking time out to work out his next move after losing two and drawing one of three fights against Fury.

Meanwhile, next up for the Gypsy King is a Battle of Britain against Dillian Whyte on April 23.