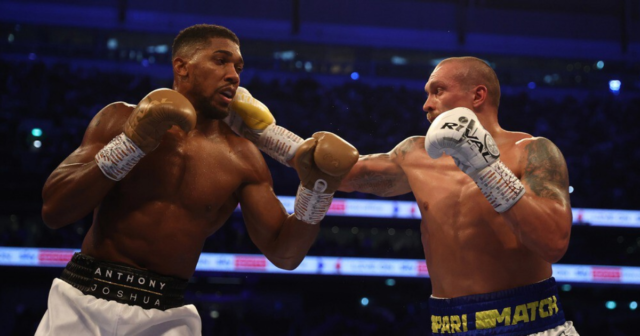 ANTHONY JOSHUA only watched back FOUR ROUNDS of his loss to Oleksandr Usyk – because ‘he didn’t like the way he boxed’.

AJ was stunned over 12 rounds in September, falling victim to a 12-round masterclass by Usyk.

And it was so heartbreaking the British superstar could not even bring himself to watch the full fight back in its entirety.

Derek Chisora, 38, said on talkSPORT: “I think AJ wins that second time round.

Ahead of his contracted rematch with Usyk, 34, Joshua, 32, has contemplated switching his training team.

Following the loss, AJ spent time in America visiting several gyms and coaches, with rumours he could split from head cornerman Rob McCracken.

McCracken has guided AJ to gold in the 2012 London Olympics and two unified heavyweight titles in the professional ranks.

It is yet to be revealed whether Joshua will replace the Team GB boxing chief or add to a trainer to work alongside him.

But an announcement will be imminent when he returns to full training camp in preparation for his rematch with Usyk.

“Obviously, his trip to America and subsequently training in the UK with various people… trainers flying in.

“I think AJ will make an announcement when camp starts, which I guess will be end of January, early February.

“But he’s worked hard to get it right. A lot of people have said, ‘Do you think it’s risky to bring in a new trainer?’

“I flip that and say, ‘do you think it’s risky to not be comfortable with your setup or your surroundings?’

“He’s put the work in to make sure he gets it right.

“I guess there’ll be an announcement regarding his training team when camp gets underway.”

Did you miss our previous article…
https://www.sportingexcitement.com/boxing/watch-moment-one-championship-kickboxer-stoforidis-brutally-kos-rival-with-left-hook-despite-being-floored-at-same-time