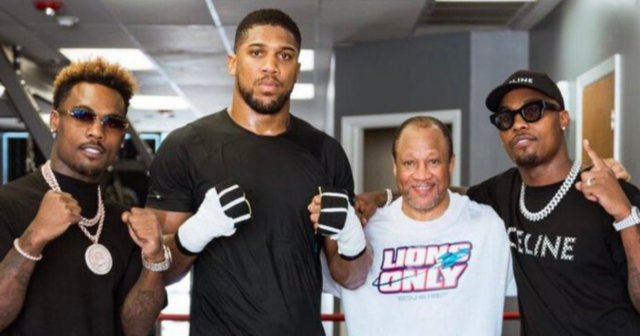 ANTHONY JOSHUA has been pictured with Jermell and Jarmall Charlo as well as boxing trainer Ronnie Shields.

Shields is the latest coach AJ has visited, after the former heavyweight champion linked up with Canelo Alvarez and Joshua Buatsi.

And he was then captured at Canelo’s adopted US training base in San Diego, headed up by esteemed trainer Eddy Reynoso.

Now Joshua, wearing training gear with his hands wrapped, posed for a picture with the Charlo brothers and coach Shields in Houston, Texas.

Joshua, 32, is enjoying some down time Stateside after his recent defeat to Oleksandr Usyk, 34, in September.

But he appears to be making the most of it with a spot of training and picking the brains of current champions like Canelo, 31, and Charlo, 31.

Following Joshua’s 12 round decision loss to Usyk he faced calls to replace his training team.

But those same doubts were raised when he lost to Andy Ruiz Jr in June 2019, before brilliantly winning the rematch six months later.

His loyalty was rewarded when he reclaimed the WBA, IBF and WBO belts after smartly switching tactics to outbox Ruiz, 32.

And there is no suggestion yet Joshua will part ways with trusted coach Rob McCracken, who had twice led him to unified titles as well as Olympic gold.

But AJ did bring in two additional trainers in Angel Fernandez and Joby Clayton before avenging defeat to Ruiz.

Gaining some knowledge from coaches in America can only be a good thing before Joshua prepares to fight Usyk once more.

He has officially invoked his right to an immediate rematch, Eddie Hearn confirmed, with a target date of March or April.

And the promoter did not rule out new faces in the training team in order to become the first to figure out the Usyk puzzle, who is unbeaten in 19 fights.

Hearn told Boxing Social: “I think what AJ will wanna do is analyse why he performed like that.

“Yeah, the tactics weren’t right, he underperformed, but why?

Did you miss our previous article…
https://www.sportingexcitement.com/boxing/tommy-furys-dad-john-backs-love-island-star-to-smash-jake-and-logan-paul-but-says-youtubers-arent-going-to-want-it

In this article:anthonyjoshua, aswell, hasbeen