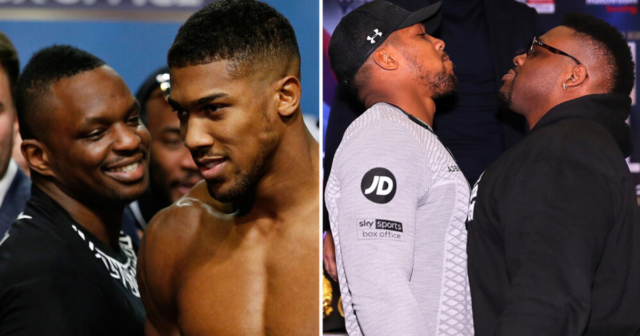 ANTHONY JOSHUA revealed only Dillian Whyte and Jarrell Miller have got under his skin as they dragged him into a verbal war ahead of their scheduled bouts.

The WBA, WBO and IBF heavyweight champion knocked out the Body Snatcher in 2015, while his proposed fight to face Big Baby was scrapped last year after the American failed multiple drug tests.

After former WBC king Deontay Wilder labelled AJ as not a true champion, Joshua was asked by SI Boxing’s Chris Mannix whether he feels the need to trash talk with boxers.

“But you don’t knock a man when he’s down, also. And that was at the top of the list. I have to stand by those principles.

Before adding: “I don’t really get on the internet talking crap. The only times you’ve seen me talking recklessly is against Dillian Whyte and Jarrell Miller.

Joshua was uncharacteristically outspoken in the build-up to his scheduled bout against Miller, as he branded the American as a “b***h” while declaring he pays his mum’s rent.

Speaking at their press conference, he said: “He is a former drug abuser, he hits like a fairy, he is the softest puncher in the division.

“I am not here trying to play a gangster role, I am here to collect rent. Jarrell Miller is a b***h.”

Prior to his seventh-round stoppage win against Whyte in 2015, Joshua branded his compatriot as ‘irrelevant’ and a ‘hater’.

And in their last press conference, he stated: “He’s just another fighter. My heart don’t beat no fear for him.

“I’ve trained for a 12-round fight, but I think it will go three or four rounds.”