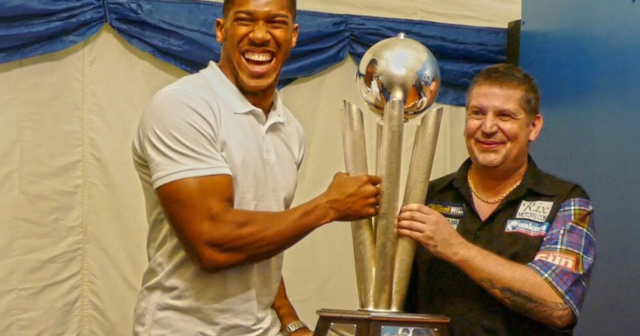 ANTHONY JOSHUA revealed DARTS would have been his chosen sport if not for boxing – allowing him to indulge in his ultimate cheat meal.

The two-time unified heavyweight world champion is famed for his incredible physique and punching power that comes with it.

But AJ admitted the freedom to snub exercise would be too tempting to stay away from if he was to choose another sport.

He told SunSport in an exclusive interview: “Darts. Definitely something that doesn’t involve cardio.

“The cardio lifestyle I’d stay away from.”

Joshua, 32, has been known to eat up to 5,000 calories a day to fuel his tireless training regime.

But even the 2012 Olympic gold medalist is prone to the odd cheat meal and sweet treat.

“But my last meal was a chicken salad, porridge and acai bowl. And you can’t beat mum’s cooking.”

Joshua’s clean eating comes as he prepares to rematch Oleksandr Usyk, 35, on August 20 in Saudi Arabia.

He fell to defeat last September over 12 rounds but is out for revenge in the Jeddah heat.

And a red-hot win, to regain the WBA, IBF and WBO belt, could tempt WBC champion Tyson Fury, 33, out of retirement for an undisputed super-fight.

Oleksandr Usyk and Anthony Joshua ahead of their Saudi Arabia rematch
Did you miss our previous article…
https://www.sportingexcitement.com/boxing/floyd-mayweathers-stripper-ex-girlfriend-anna-monroe-shows-money-what-he-is-missing-with-vegas-bikini-pics/
Advertisement. Scroll to continue reading.
In this article:allowing, anthonyjoshua, ifnot