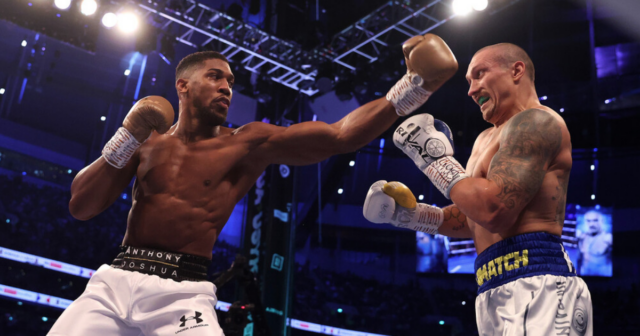 ANTHONY JOSHUA claims he only lost to Oleksandr Usyk due to the Ukraine ace being a southpaw.

AJ saw his heavyweight world-title dominance go up in smoke in September, when the left-hander outboxed him.

Joshua is readying himself for the sequal

But the Watford ace, 32, bizarrely said the Tottenham Hotspur Stadium loss — despite Usyk’s undisputed cruiserweight reign and 335-15 amateur record — was purely down to his stance.

The London 2012 Olympic legend said: “Fighting a leftie is a nightmare and he is a good one as well.

“But with this leftie nonsense it’s just different, they set you up differently.

“If you are a good leftie you have a good chance of making it in boxing, I reckon.”

When Usyk moved up from the 14st 4lbs cruiser division he cleaned out, he revealed 16st was his ideal weight up at heavy.

The father-of-three was 15st 7lbs for the points win over Derek Chisora and 15st 11lbs for the Spurs schooling of AJ.

In the most recent pictures from his Dubai camp – where he has sparred giant orthodox monster perfect for imitating AJ – Usyk looks huge.

But AJ insists his new partnership with trainer Robert Garcia, Loughborough gym and fresh killer mindset will help secure him victory by maximising his height, reach and weight advantages.

When asked if the speculation was in fact the plan, he said: “Yes, it’s evident isn’t it, it’s not a secret.

“They are things that I need to use but it’s easier said than done so we work on it.

“That’s why training camps are so challenging and why you usually see a fighter straight on the beach after a fight, it’s draining.

“It’s evident that I am stronger and bigger and – if I can impose my strengths on him – I will have a better chance of winning the fight.”

Nobody in their right mind can criticise Joshua for his career so far, he didn’t even pick up a pair of gloves until he was 18 yet has made British boxing a mega-money industry with elite opponents.

But he has been stunned by the power of Andy Ruiz Jr and bamboozled by the skill of Usyk.

And he seems so sure he has the right gamplan to complete his second rematch revenge mission, after making a hash of his idea to outfox-the-fox first time around.

“I always predicted, at the start of my career, that I would be the sort of fighter who had to suffer defeats and go down this route, because of the challenges I take,” he rightly said.

“I like taking good challenges and I have even done that as an amateur, always straight in the deep end.

“I didn’t have a winning mindset for Usyk, I didn’t think ‘I want to go in there and smash him’. I wanted to compete with him, at boxing and see how good I was at it.

Every British boxing fan in the world should hope he does – somehow.