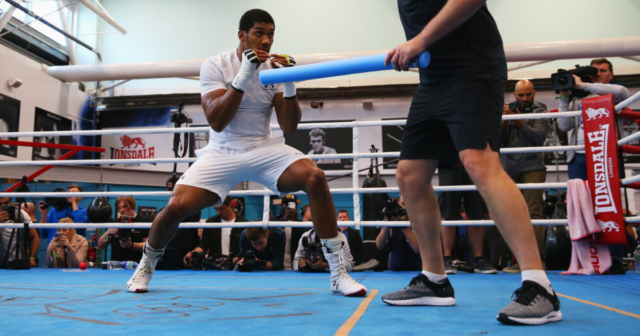 ANTHONY JOSHUA is set to make an announcement on a new trainer ahead of his Oleksandr rematch with fresh faces a ‘certainty’, according to Eddie Hearn.

The British heavyweight, 32, lost his belts to the Ukrainian master in September.

Anthony Joshua will make an announcement over his trainer situation when he begins training camp, according to Eddie HearnJoshua has been working with new trainers since he lost to Usyk in September under McCracken

Trainer Rob McCracken hatched a plan to try to outbox the southpaw genius on the night at the Tottenham Hotspur Stadium.

But the tactic backfired spectacularly and AJ has been working with new trainers ever since.

Joshua has been on a tour of the US and Dubai auditioning new trainers like Eddy Reynoso, Virgil Hunter and Floyd Mayweather, with McCracken set to take the fall.

Last week, Hearn claimed changing trainers would be a ‘huge risk’ – but has now claimed a shake-up is on the cards.

“Obviously, his trip to America and subsequently training in the UK with various people… trainers flying in.

“I think AJ will make an announcement when camp starts, which I guess will be end of January, early February.

“But he’s worked hard to get it right.

“A lot of people have said, ‘do you think it’s risky to bring in a new trainer?’

“I flip that and say, ‘do you think it’s risky to not be comfortable with your setup or your surroundings?’

“He’s put the work in to make sure he gets it right.

“I guess there’ll be an announcement regarding his training team when camp gets underway.”

When asked if he believes McCracken will stay play a role in AJ’s camp, Hearn hinted he would.

The Matchroom chief continued: “He’ll always be involved in some way.

“He’s more than just a trainer to Anthony Joshua… he’s a mentor, an advisor.

“Those two will always talk – in what capacity, I don’t know. I’ll leave that to AJ to announce.

“But there will certainly be additions to the training team.”