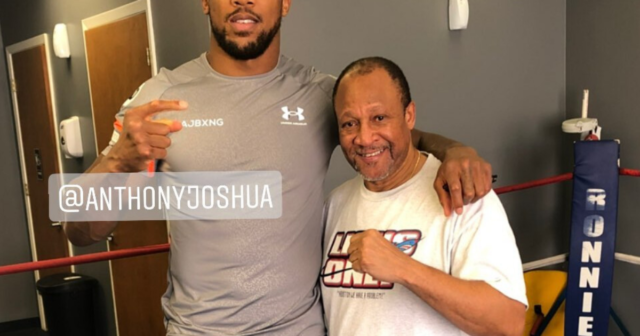 ANTHONY JOSHUA has told potential new trainer Ronnie Shields to bring out the dog in him against Oleksandr Usyk.

The 32-year-old Watford ace has left under-fire mentor Rob McCracken to go on a tour of some of America’s best gyms following the punishing September loss of his heavyweight world titles.

And the 2012 Olympic golden boy spent a couple of days studying the unanimous points loss with Mike Tyson’s former trainer, before doing some padwork with the 63-year-old.

Shields told The Boxing Voice: “The first thing he told me when he came here, he told me, ‘listen, I know people don’t think that I’m a dog, I’m just a pure boxer, look, I’m gonna be a dog in this next fight’. And that’s his words.

“He told me, ‘I’m gonna be a dog in this fight, I just need you to show me how to be the best dog that you can teach me to be’.

“That answered the question for me because my thing to him was, ‘why did you box the whole time?’, and he said he thought he could out-box him, and that was the game plan.

“He says he has it in him, if things work out and I’m training him and once it comes down to it, now in the gym is the time to show it and in the fight you’ve got to show it too.

“It’s going to be hard work, we sat down and talked about everything and I think everything went great.”

McCracken’s work with Joshua has been rightly celebrated but he was forced to allow two more coaches into the corner after the June 2019 loss to Andy Ruiz Jr.

Angel Fernandez and Joby Clayton helped Josh regain his belts from the Mexican and knockout Kubrat Pulev in December.

But some of the tactics and cheerleading captured on camera, in between the late rounds Usyk comfortably banked, left fight fans baffled.

And Shields has revealed Joshua has already afforded him hours just to talk about the sweet science and he has been surprised by his lack of knowledge.

He added: “In the last two days everything seemed to go well. The first day was just all talk, we talked for about three or four hours.

“We watched a few rounds of the Usyk fight together and I just pointed out some things that I thought he should’ve done that he didn’t do.

“‘We had a great talk yesterday, today was even greater. There’s something I showed him that he said, ‘man, I was never taught to do this’.

“It surprises me that a guy who was the heavyweight champion of the world doesn’t know certain things.”

Team AJ insist no decision has been made on the future of the backroom staff and Joshua is just on a busman’s holiday to the US soaking up knowledge from a range of gyms and trainers.

But Shields seems to already be formulating a plan for the Englishman to exact rematch revenge over Usyk, that could spell the end McCracken’s brilliant tenure.

The former featherweight said: “‘Obviously it wasn’t the right game plan, I told him he didn’t fight like himself. I think he’s a much better fighter than what he showed in that Usyk fight.

“I watched a few rounds with him and his team, I told him about certain things and he said, ‘yeah man, that’s what we should’ve done, but we didn’t do it’.

“When you have a game plan you have to work on it every day, you have to get it down pat before that fight and when you get in there you have to do things you did in the gym.

“I don’t know what their game plan was, obviously it wasn’t the right one and I guess he didn’t feel like it was the right one so this is why he wanted to make a change.”

Did you miss our previous article…
https://www.sportingexcitement.com/boxing/logan-paul-leaves-plush-mayfair-restaurant-with-mystery-ladies-before-heading-to-the-celebrity-hotspot-tape-nightclub