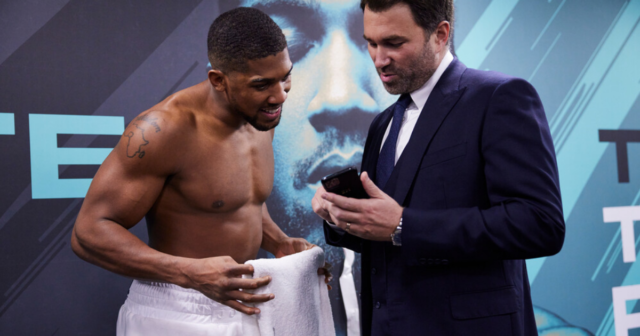 ANTHONY JOSHUA has been backed by Eddie Hearn to continue fighting until at least 36 – having suddenly asked about retirement.

And there could be plenty more to come with AJ tipped to carry on for a minimum of five years after asking his promoter about the future.

Hearn told takSPORT: “He said to me the other day, ‘How long do you think I should fight for?’

“And he just messaged me the other day and said, ‘How long do you think I should fight for?’ I said, ‘For how long you have the love for the sport.’

“Because it’s such a dangerous sport, the minute you start fighting without desire, just for the money, you have to stop this game.

“Because it’s too dangerous without that will and drive every day.

“But he is so driven and I think he has so much more, so many more improvements to make.

‘HE’S OBSESSED WITH THE SPORT’

“It’ll always be him who calls time, but I don’t see him going anywhere for five years minimum.

“He loves what he does, but it’s also a huge sacrifice on the body, on the mind, to family.

“He’s so driven, he doesn’t have time for that. He’s such a big family man, but he’s so obsessed with the sport – it’s all he does.”

Joshua has previously spoke about heading towards the end of his career and compared it to an Olympic-cycle, with the next Games set for 2024.

His fierce rival Tyson Fury, 32, once revealed he would hang the gloves up right after beating Deontay Wilder, 35, again and then AJ.

But in May last year, the unbeaten Gypsy King made a U-turn and said he could fight well into his 40s – like Wladimir Klitschko, now 44, famously did.

Fury told ESPN at the time: “I’m going to fight on until I’m 40 years old. I’ve been thinking about it, and there isn’t much else to do anyways.

“So yeah, I may as well keep fighting. I don’t see anyone out there that can challenge me anyway.”

Wilder, who drew with Fury in 2018 but lost the rematch two years later, faces the Brit in a trilogy bout on October 9.

But Joshua’s promoter Hearn and Fury’s Bob Arum are both hopeful an all-British unification could be salvaged afterwards if they both win.