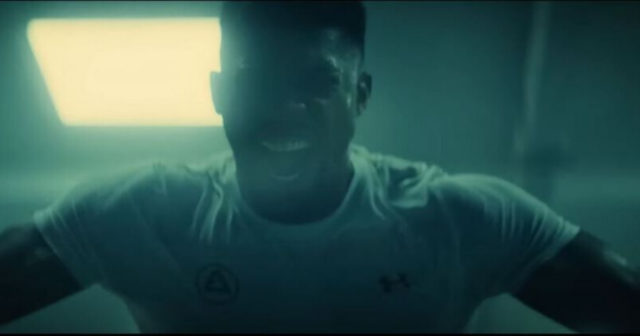 THE latest promo for Anthony Joshua’s rematch with Oleksandr Usyk has dropped – with fans excited for the much-anticipated bout.

Joshua’s title reclamation mission takes him back to Saudi Arabia, where he will face the fearsome Ukrainian once again.

Anthony Joshua is well up for his title rematch

Prince Naseem made a popular cameo

The Brit lost his heavyweight belts on an underwhelming night at Tottenham Hotspur Stadium 11 months ago.

But he will seemingly stop at nothing as he heads to the desert to try and claim back what he believes are rightfully his.

The promo begins with a portion of commentary from the first fight, saying: “It was a fabulous performance from Oleksandr Usyk.

“And Anthony Joshua loses his heavyweight titles. But he’ll be back.”

The advert shows AJ and Usyk both sat reflecting in empty gyms, before cutting to a shot of the vast Saudi desert.

After shots of Saudi Arabia, the promo returns to the gyms, showing Joshua and Usyk in intense training for the fight.

AJ, 32, is then shown checking out King Abdullah Sports City, where the fight will take place.

The 48-year-old former featherweight champion says: “It’s all going down in Jeddah.”

Fans loved seeing his appearance, with one commenting: “Great Promo. Goosebumps!!! But, I was more gassed to see Prince Nas in the promo.”

While another wrote: “Seeing that cameo from Prince Nas gave me chills!!”

The promo finishes with Joshua and Usyk about to face off in the ring.

UK-based fans will have to shell out a record £26.95 to watch the bout.

Although Usyk has gifted it for free in war-torn in Ukraine.

Joshua has been working up a sweat in preparation for one of the biggest nights of his career.

Former champion David Haye believes that AJ needs to employ the dark arts to get it done on August 20.

He said: “He should be this close to getting a point deducted or disqualified, that’s how physical he needs to be because he’s a specimen like no other in the heavyweight division.”

Usyk and Joshua faced off at the end of the promo

The duo will square up on August 20