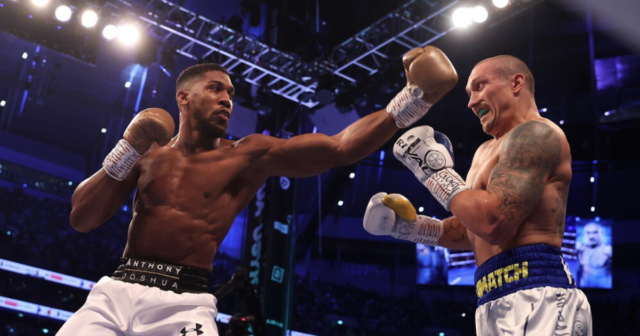 Just like the Olympic gold medallist did after his loss to Andy Ruiz Jr in 2019, Joshua wants to right his wrong by facing the Ukrainian in a rematch.

Anthony Joshua lost to Oleksandr Usyk at Spurs Stadium in front of 70,000 fans

Joshua’s promoter Eddie Hearn admitted after that his client boxed nowhere near to the ability he would do in a potential rematch.

AJ, meanwhile, said the fight was a learning experience in the post-fight news conference, vowing to gain his vengeance on Usyk.

Since then, the two sides have been negotiating toward a huge money-spinning sequel, but offers for Joshua to step aside to allow an undisputed clash with Tyson Fury has delayed the process.

Fury, however, will fight mandatory challenger Dillian Whyte next, leaving Usyk and Joshua to fight once again.

“I need to go and get some new teachings from guys that have trained – Robert Garcia trained 13, 14 world champions,” Joshua told iFL TV.

“They’ve got so many generations of teachings. Virgil Hunter trained Andre Ward, a phenomenal fighter.

“I need to go and get some new teachings from guys that have trained – Robert Garcia trained 13, 14 world champions. They’ve got so many generations of teachings.

“Virgil Hunter trained Andre Ward, a phenomenal fighter. I wanted to go around and be in an environment of fighters.

“Eddy Reynoso, ‘No boxing, no life.’ I love that saying. Canelo is obviously a phenomenal fighter. I watched him spar 12 rounds, asked certain questions.

“Ronnie Shields, another African American coach who has worked with the greats.”

Hearn has previously claimed the fight will be held in another open-air UK stadium.

“It’s very likely to happen in the UK, but we’ll sit down and look at the options,” he said after the fight.

“So I’d like to do it in England again. Maybe at Spurs, maybe at Wembley, maybe at the Emirates. They’ll be approaches to do it elsewhere but I don’t see any reason to take it outside of England.”

There are also likely to be approached from the Middle East for the fight, with Saudi Arabia having held Joshua’s clash against Andy Ruiz Jr in 2019.

Usyk said in the post-fight news conference he was eager for the second fight to be held in the Olympic Stadium in Kiev, Ukraine.

“I would love to have the rematch at Olympiyskiy Stadium in Kiev,” said the new unified champ.