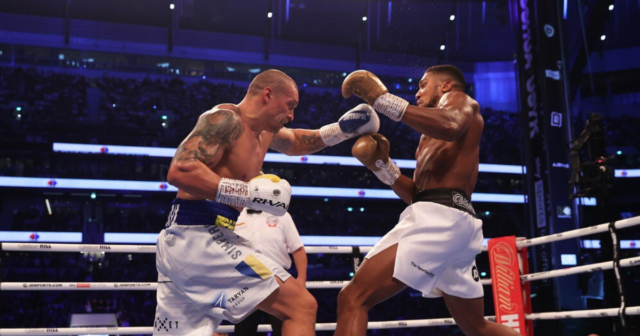 ANTHONY JOSHUA was dethroned in spectacular fashion as he LOST his heavyweight world titles in a unanimous points defeat.

He went the distance with Ukrainian challenger Oleksandr Usyk at the Tottenham Hotspur Stadium.

Anthony Joshua was beaten by Oleksandr Usyk in their Tottenham showdown

Usyk came out of the blocks well before AJ enjoyed a better middle of the fight.

But the former cruiserweight finished strongly as it went down to the wire with the judges’ scorecards.

A dimwitted selection of AJ’s boorish fans booed the Ukraine national anthem and the eerily eccentric southpaw looked intent on punishing them for it.

The bizarre reflective mask he walked to the ring wearing was the final attempt to unsettle AJ outside the ropes.

The Brit icon looked ice-cool on his ring walk, singing the opening lines to his entrance music and enjoying a little dance just before he emerged into the open air and the 60,000 crowd erupted.

He even took a detour from his firework-and-flame dashed route to bump fists with a lucky selection of the crowd.

AJ then raced across the ring and they exchanged backhands before jabs.

But a couple of stiff right hands from the Watford ace settled the crowd.

Both chess lovers played it safe at the start of the second before AJ scored with a cuffing left hook.

Usyk, for all his genius, could not find a way through the champ’s high guard early on.

The challenger stepped on the gas for the final ten seconds of what was a close round that AJ probably won by holding the centre of the ring and landing one right hand.

Usyk’s small section of the crowd got excited when a one-two landed and jutted Josh’s head back.

But when the leftie threw a backhand to AJ’s body he was clipped with a counter hook to his shaved head.

Then a straight left landed on AJ’s jaw and he wobbled and buckled and looked in danger before the bell saved him.

AJ needed to recover from that booming left hand quickly.

But he seemed off balance and almost slipped over and hit the deck and needed the ropes to hold him up.

AJ then landed a couple of jabs and a decent right hand that seemed to prove he was back on the ball after that third-round scare. 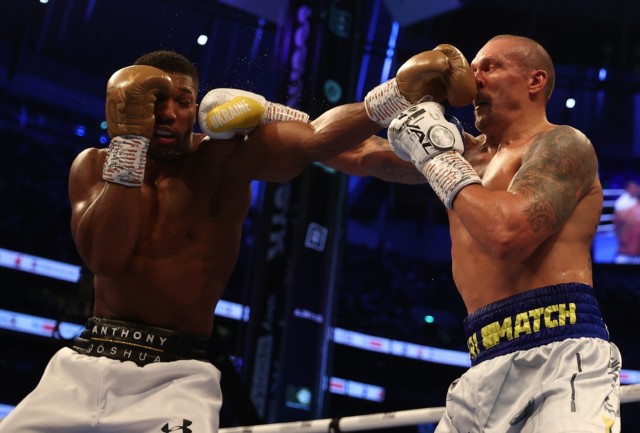 Usyk came out flying in the early rounds of the fight

AJ landed a hook to Usyk’s ribs and then upset him with a low blow that went unpunished by the ref.

The Watford ace seemed happy with his right hand work, shaking it at his opponent as if to warn him that it was going to keep coming.

Then he ended the stanza with a good flurry that Usyk’s supreme movement could not quite evade.

A firm Usyk jab knocked the sweat off Joshua’s brow and into the sky.

And then a precise three-punch combination from Usyk would have impressed the judges.

But then an arrow-like right hand from AJ stiffened Usyk up and he looked hurt for the first time in his 18-0 career.

The crowd loved the end of the session and felt their man was on the cusp of a brilliant win.

Usyk recovered well and landed the first blow of the session.

Then a couple of excellent counter punches took their toll and AJ was rocked backwards by a big left hand.

He remained upright but it was another worrying round for the Englishman who was only looking good in spells.

A straight AJ right got the crowd buzzing again and a looping uppercut hurt Usyk.

Right at the end of the round, Josh lopped in a couple of bollo shots to the body, they scored.

And Usyk complained that one was low, which might have been a sign he was starting to struggle with the power in front of him. 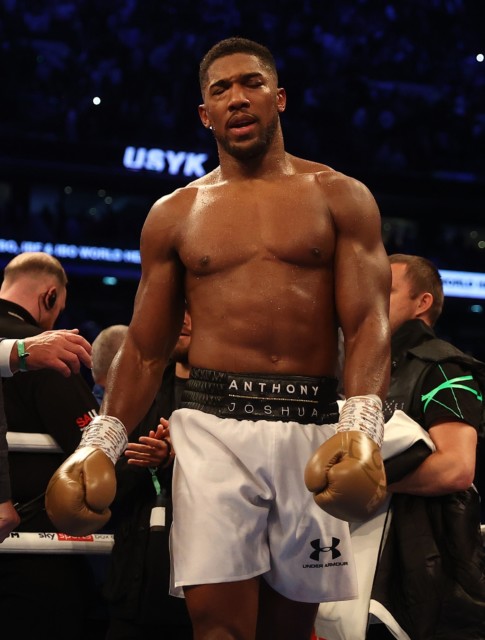 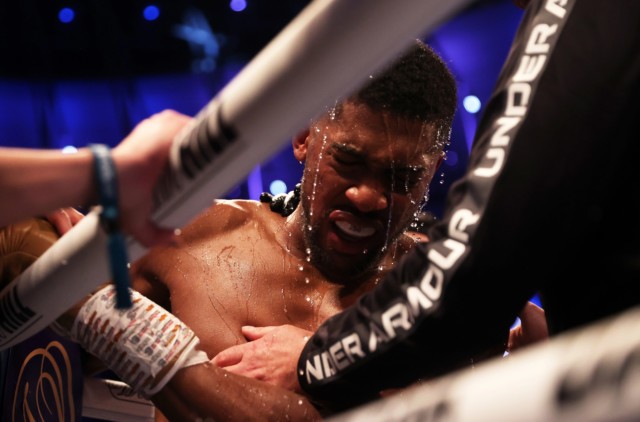 AJ’s engine seemed to be holding up well down the stretch.

But he then missed wildly with an uppercut that started from the floor and ended in the clouds.

AJ enjoyed moments in the middle of the stanza but Usyk also connected with another straight left just before the bell.

Another tight round, tough to score.

Usyk complained again about AJ manhandling him this time.

A cut started to drip into Usyk’s right eye and he was blinking and pawing the blood away.

The familiar scent of a bleeding rival thrilled AJ’s nostrils and he stepped on the gas.

But Usyk proved his chin up at heavyweight and even managed to leave some damage around Joshua’s right cheekbone and eye.

Usyk smashed a left hand right down AJ’s pope as soon as the round started.

But he banged back a couple of rights of his own in revenge.

The Ukraine icon kept landing that straight left hand though and the welt growing around AJ’s eye was growing.

It was nip and tuck all the way. Both men were tough and dangerous.

A little Usyk left hook landed but only grazed the Brit.

Then suddenly he was out on his feet getting held up only by the ropes.

Usyk had kept landing that left hand and AJ’s legs had betrayed him.

The glazed-eye grin we had seen before was smeared all over his face and he was on the cusp of collapse.

But the bell went and took the decision to the three ringside judges.

AJ looked defeated and retired to his corner where he sat down on his stool and seemed to be gasping for air, Usyk strolled over there to congratulate and hug him for a great fight.

Then all three judges picked the southpaw underdog for the upset.

Thankfully for AJ, Michael Buffer got the scores delivered rapidly so not to prolong the pain.

AJ looked dejected but accepting, he walked around the ring and tried to tell Tony Bellew that he was OK.

He slipped out of the ring, away from the disappointment and back to the drawing board. 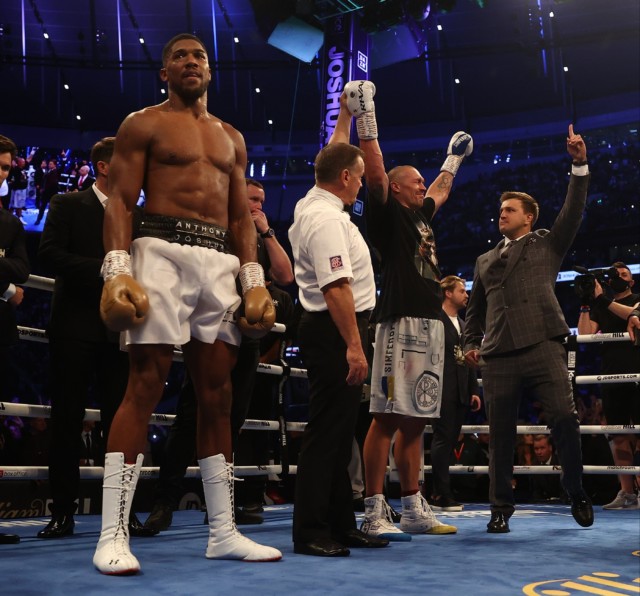 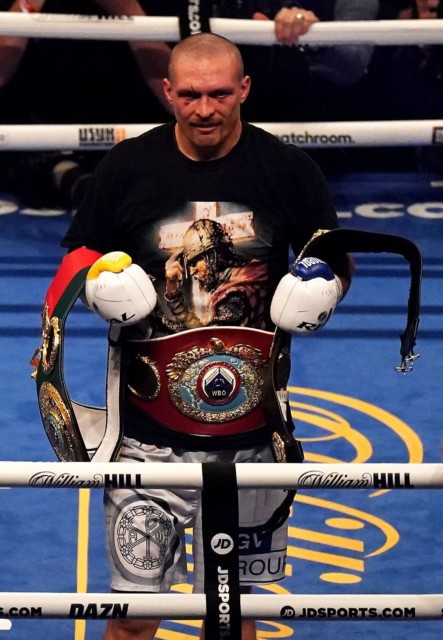 The new champ holds his belts inside the ring after the results come in
Advertisement. Scroll to continue reading.
In this article:anthonyjoshua, oleksandrusyk, tottenham hotspur, tottenham hotspur stadium, tottenhamhotspurstadium, watford