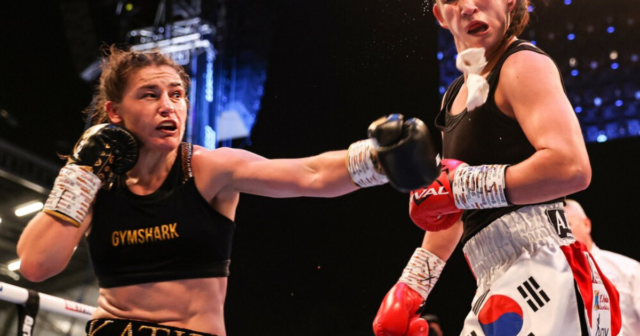 A blockbuster showdown between boxing phenoms Katie Taylor and Amanda Serrano is close to coming to fruition, according to promoter Jake Paul.

Paul signed Puerto Rico’s Serrano to his Most Valuable Promotions a month after she competed on the undercard of his clash with ex-UFC star Tyron Woodley. 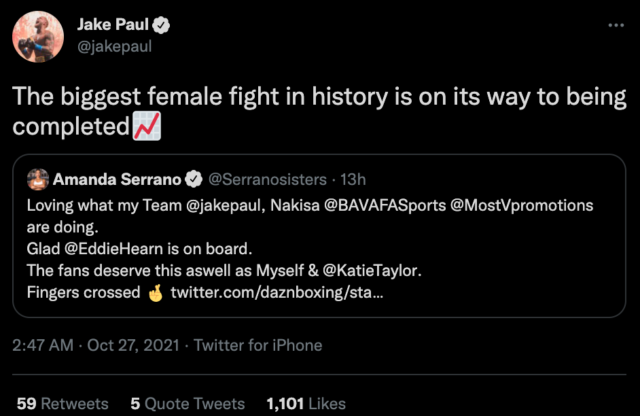 The Problem Child snapped up the WBC, WBO, and IBO featherweight queen in a bid to help her bag the biggest fights available.

And after talks with promoter Eddie Hearn, a showdown with undisputed lightweight queen Taylor could soon be on the cards for the 33-year-old.

Paul tweeted: “The biggest female fight in history is on its way to being completed.”

Taylor and Serrano, who are regarded by many to be two No.1 and No.2 pound-for-pound fighters, were scheduled to meet in August 2020.

The mouthwatering bout, however, fell through after Serrano pulled out for financial reasons.

Serrano campaigned for the fight again after her unanimous decision victory over Yilameth Mercado in August.

And Irish sensation Taylor is champing at the bit to get it on with the younger Serrano sister.

She told DAZN: “That’s a fight that has been talked about for the last couple of years.

“This fight has been brewing for a long time.

“It’s been scheduled a couple of times before.

“I was asked to prepare for that fight before and it fell through a couple of times and not because of me.

“I think that her and her team were the ones actually pulled out of the fight.

“I would obviously be very, very excited as well to step into the ring against Amanda Serrano.

“I actually think the fight is bigger now than it has been before.