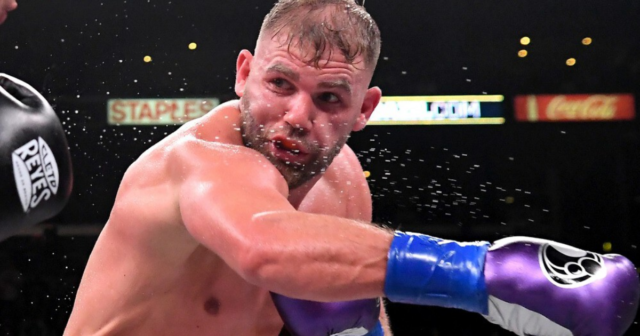 BILLY JOE SAUNDERS has denied claims he stabbed a man in the hand and threatened someone with a gun.

The British boxer, 32, has released a statement denying the sensational claims.

The father of his alleged victim recently claimed 30-1 Saunders stabbed his son through his hand before pulling a gun on him.

But Saunders – who hasn’t fought since his sole career loss at the hands of Canelo Alvarez in May – called the claims ‘complete rubbish’.

In a short post on his Instagram story, the boxer wrote: “I am aware of a video circulating on social media.

“It makes certain allegations against me, all of which are complete rubbish.

“However, given the police may be involved at some stage, my lawyer advises me to make no public comment at this stage.

“I am of course more than happy to speak to the police should they wish to contact me.”

Saunders hasn’t fought since losing to pound-for-pound king Canelo in May.

The Brit’s team ultimately threw in the towel during the eight round after he fractured his eye.

Saunders was quick to claim he didn’t quit, saying: “If I wanted to go down on one knee with a broken eye socket, it could’ve easily been done.

“I went over a minute and still carried on… Anybody who knows me personally knows that’s not in me, ever.”

Advertisement. Scroll to continue reading.
In this article:billyjoe, thebritish, thehand