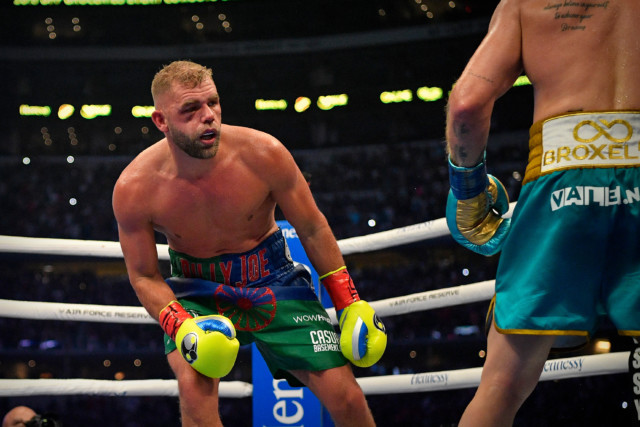 BILLY JOE SAUNDERS has been warned by his trainer Mark Tibbs it will be ‘very tough’ to deal with defeat to Canelo Alvarez.

The Brave Brit was rightfully pulled out before the start of round nine after a right uppercut from Canelo caused significant damage.

It was later revealed Saunders suffered a fractured eye socket and cheekbone, which required surgery.

Head coach Tibbs made the correct call to pull his man out and stresses the most important thing now is to allow the former champion to recover surrounded by his loved ones.

He told talkSPORT: “It’s going to be a very, very tough time emotionally for Billy Joe.

“He comes from the community he comes from and they are a very proud people and it is just going to be very tough.

“Listen, how he has to got to look at it as he went against a pound-for-pound great in Canelo Alvarez and he put up a good fight against him.

“He put up a good fight until he got his eye damaged with one punch, so that turned the fight around.

“It’s going to be tough for Billy Joe and he has a good family around him and good support with his friends.

Saunders, 31, had began to start boxing with a rhythm in the middle stages of the super-middleweight unification.

But a devastating right uppercut in the eighth caused immediate damage to his right eye.

His corner was left with no choice but to wave the action off, as Saunders congratulated Canelo, 30, who inherited his WBO belt.

“But one of his friends has text me and filled me in on the situation, that he wants to be with his friends right now and his family.

“He is dejected and after went on in the corner there, he was dejected and he was sitting there and I always step aside and let the doctor do his work.

“He was sitting there with the doctor and I said to him, ‘Have you finished with him yet?’ That’s when I spoke to Billy.

“I said to Billy, ‘Get up and take that towel off your head and go and shake Canelo’s hand.’

“And he did that, just as I finished my line, he was gone. I told him while he was there to shake his trainer’s hand as well and he did that.”