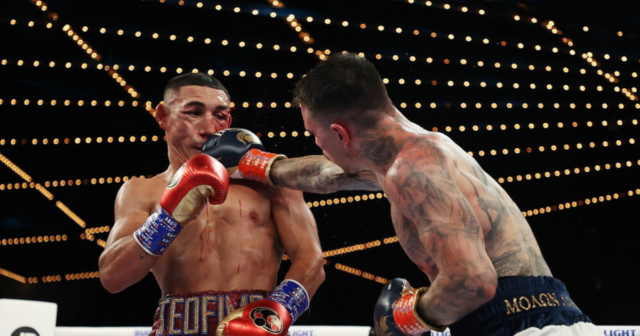 GEORGE KAMBOSOS JR dominated Teofimo Lopez in their world lightweight fight but somehow only won on a split decision.

Fighting in his first world title contest, the 28-year-old floored Lopez in the opening round, before being dropped himself in the tenth round.

But the Sydney native bossed the majority of the bout as he kept his 24-year-old opponent at bay with his jab for large periods at time.

And it came to a surprise to most people when it was announced that a third judge was needed to decide the winner of the dust-up.

Judge Don Trella somehow scored the fight in favour of Lopez by one round, while Frank Lombardi and Glenn Feldman had Kambosos Jr four and three rounds up respectively.

What is even more baffling is that Trella scored the first round 10-9 for Kambosos Jr, despite him sending Lopez crashing to the canvas.

Feldman also had it 10-9 for the challenger in round one with the pair believing that Lopez wasn’t outclassed in the first three minutes.

Trella also awarded the tenth round 10-8 in Lopez’s favour after the American scored a knockdown of his own.

All three judges agreed that Kambosos Jr won the first half of the fight, with Lopez nicking late rounds as the former tired.

To the amazement of the boxing world, Lopez declared that he should have had his hand raised as the winner.

He even stated that he won 10-2 on rounds, though insisted that he isn’t a ‘sore loser’.

Lopez said: “He’s a hell of a fighter, but I won tonight, everybody knows that.

“At the end of the day I’m a true champion, I did what I had to do, and I went out there and did my best.

“I don’t care what anybody says, I am as real as they come, and this is the takeover man, we don’t stop, we keep coming.”