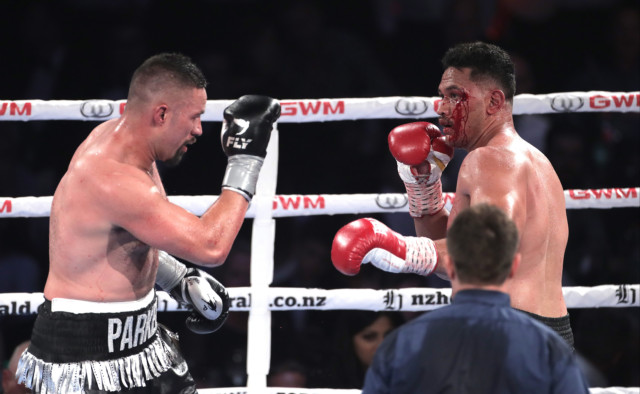 NEW ZEALAND boxing fans were left gutted after the ring announcer for Joseph Parker’s win over Junior Fa told the packed arena they are going into a seven-day lockdown.

The country’s prime minister Jacinda Ardern announced the measures on Saturday night (NZ time) and the MC passed the message on to the crestfallen crowd.

Parker and Fa met at the Spark Arena in Auckland after their initial 2020 bout was postponed because of coronavirus.

The 12,000 capacity arena was packed with fans as the island nation have managed to contain the virus and New Zealanders currently face far fewer restrictions than Brits as a result.

But the buoyant mood was shattered when the announcer told the crowd Auckland would be locking down for a week from the following morning.

The measures have been implemented after a new local case of coronavirus of unknown origin emerged.

And the person had visited several public venues since they became infectious last Sunday.

As a result, Ardern said: “Based on this, we are in the unfortunate but necessary position to protect Aucklanders again.”

It comes just a fortnight after the North Island city’s 2million residents had to lock down for three days after a family of three tested positive for the highly contagious UK variant.

Mad enough, room full of fans at the Parker v Fa boxing in Auckland yet they are going back into lockdown later. Lucky to get the boxing on with a cried.

Iseult wrote: “Can you imagine announcing to a boxing crowd they are going back to lockdown…

“Brave announcer and way to kill the fight mood.”

And Mr Jonny added: “Mad enough, room full of fans at the Parker vs Fa boxing in Auckland yet they are going back into lockdown later.

“Lucky to get the boxing on.”

Parker did not look happy with his performance after the win.

And Fa said: “I loved the fight.

“I try to be a role model and I hope I influence people to be kind.

“That was a tough fight, all credit to Joe. I learned a great lesson but I did not get caught with too many punches.”

After the new lockdown announcement, Joseph Parker-Junior Fa organisers are now rushing through the fight schedule to get this crowd of around 12,000 out of Spark Arena by 11:30pm. The main event was originally due to start at 11:10pm. pic.twitter.com/Za9wSfVCsR

Advertisement. Scroll to continue reading.
In this article:juniorfa, newzealand, saturdaynight