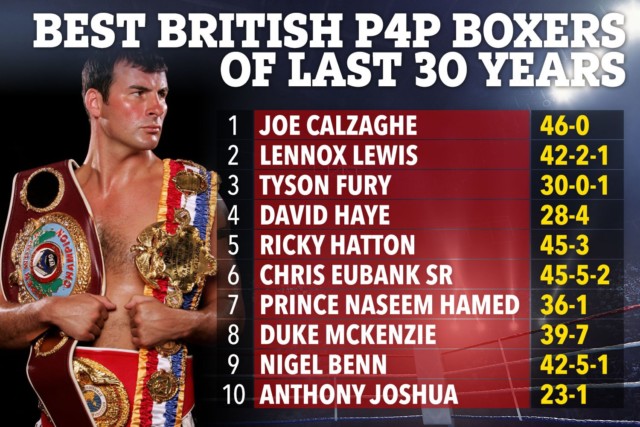 BRITISH boxing has enjoyed a boom in the last 30 years thanks to supreme talents, loveable characters, Olympic successes and the rise of the internet boosting the sport.

The 1990s were lit up by heavyweight champs Lennox Lewis and Frank Bruno while middle and super-middle was riddled with brilliance and tragedy as Chris Eubank Sr, Nigel Benn, Michael Watson and Herol Bomber Graham thrilled us, before unbeatable Joe Calzaghe emerged.

Prince Naseem Hamed and Amir Khan battered down the doors for British-Muslim boys to follow in their rhythmic footsteps and three-weight world champ Ricky Burns gave his diehard Scottish fans some of the best nights of their lives.

James DeGale became the first Brit to race from Olympic gold to world title, George Groves reached the pinnacle in a Rocky-like fourth try and now we have gone full circle as Anthony Joshua and Tyson Fury rule the blue riband division.

Now boxing has returned after lockdown, SunSport undertook the terrible task of picking the top 10 (well, actually it ended up as 11) of the last 30 years and apologies in advance for missing your favourite fighter from the brilliant mix of icons past and present. 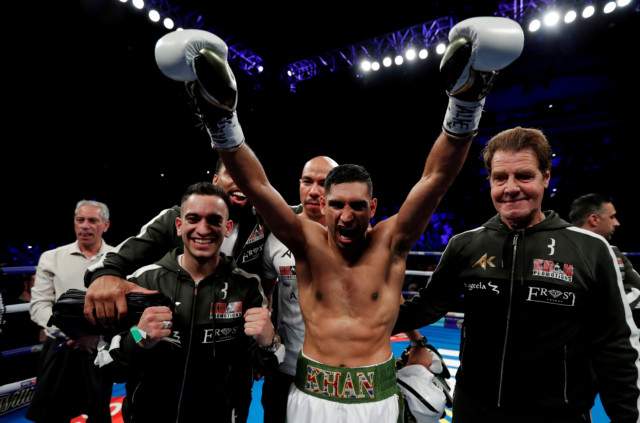 Big things have been expected of Khan from an early age

An Olympic silver medal winner at 17, light-welterweight world champ at 22 and he could have been even more.

Khan has faced some of the best names of this era – even though Floyd Mayweather and Manny Pacquiao both avoided him – but that bravery or perhaps big-purse focus will cost his legacy.

When he rebuilt at 147lbs, with his defence improved by Virgil Hunter, he beat Luis Collazo, Devon Alexander and Chris Algieri.

Just on the cusp of becoming a two-weight champ, he snatched the Canelo payday and was almost decapitated by a middleweight monster who looked and hit like a light-heavy.

At his peak, Khan’s heart – unlike his too-often unguarded chin – could never be questioned, just look at the last three against welterweight boogeyman Maidana and remember the good ol’ days. 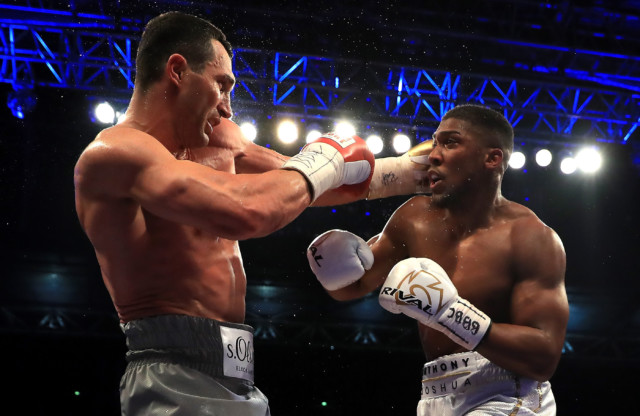 Joshua downing Klitschko set his career on course for superstardom

The result was avenged and the three belts reclaimed but the upcoming bouts against the elite likes of Tyson Fury – that promoter Eddie Hearn hopes to turn into a two or three-legged affair – and undisputed cruiserweight genius Oleksandr Usyk will show us AJ’s true worth.

Hopefully, before the 30-year-old’s career is over he will have catapulted himself up this list and convinced the important American fans and pundits who remain unsure of his credentials after the New York collapse.

But the 2012 Olympic gold, just a few years after walking into the gym as a raw bricklayer, and rapid race to three world titles – and the thrilling fights along the way – have changed the sport in Britain already. 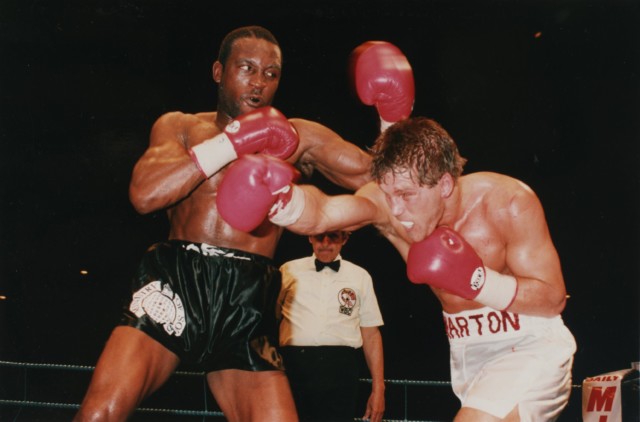 Benn was a popular figure who even attempted a comeback last year, before injury struck

Before Ricky Hatton there was Nigel Benn, working-class fellas with character flaws and professional failings who carry the hopes of the nation on their shoulders.

Benn, like Hatton and Carl Froch who came after him, would happily reel off the long list of skills he lacked and physical attributes he gave away.

But when Benn and his kind slide through the ropes their desire and defiance totally take over.

At his ruthless peak, the Dark Destroyer was only beaten by Michael Watson and Eubank.

The final three losses that ended the former soldier’s career came after a lifetime of heavy fire and even heavier partying.

But raiding America for the WBO title in 1990 and demolishing Iran Barkley in round one of his first defence were worth the hangovers. 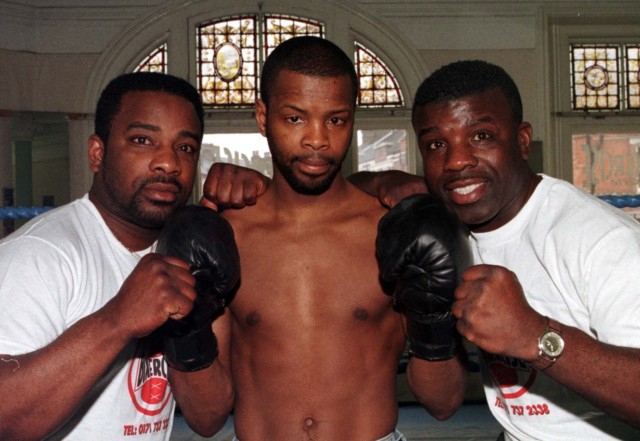 The three-weight world champion enjoyed his best wins during the 1980s but he added titles two and three at the start of the Nineties and could not be ignored in this list.

Collecting straps at the less fashionable weights of fly, bantam and super-bantam in ’88, ’91 and ’92 means his achievements never got the mainstream acclaim of the masters who followed him in the Hollywood divisions between welter and heavy.

McKenzie’s 39-7 record is harsh also, as three of those late losses came when overextending even his own skills at feather and super-feather where even his excellent jab could not hold off naturally bigger men. 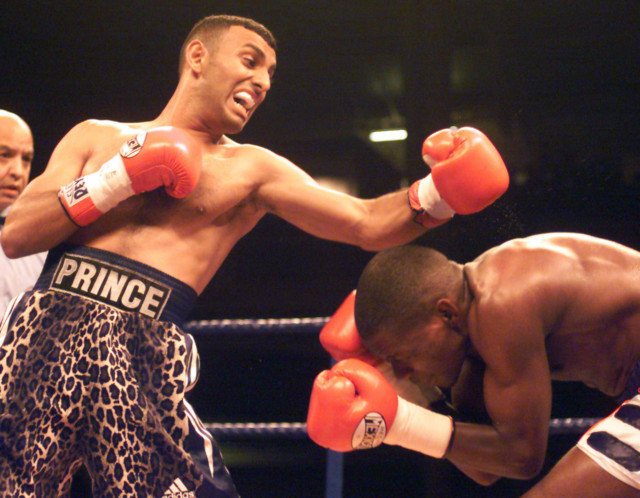 The Prince earned a loyal fanbase from his Sheffield beginnings

Arguably the most talented fighter these shores have ever produced and forever remembered as the one that got away.

Raging success and unimaginable riches, for the scrawny Sheffield kid from Yemeni parents, seemed to ruin the brilliant featherweight, sour his relationship with the legendary trainer who helped forge him and sadly tarnish his legacy.

Brendan Ingle had lost hold of the former WBO, IBF and lineal 9st king long before his bravado and lack of commitment came back to bite him against Marco Antonio Barrera in Las Vegas, in his only defeat.

And when 10,000 fans booed his London comeback bout, he took it as a sign to vanish off to count his millions, not his calories and let his perpetually injured hands heal.

The Kevin Kelley clash will never fade, the flying carpet entrance remains and the trademark corkscrew shot is still imitated by boys like hot prospect Dennis McCann, in gyms all over the UK.

But the lack of more elite names on his record, that undisputed crown, or even a world title at a second weight, all count against the superstar who burned out at 28. 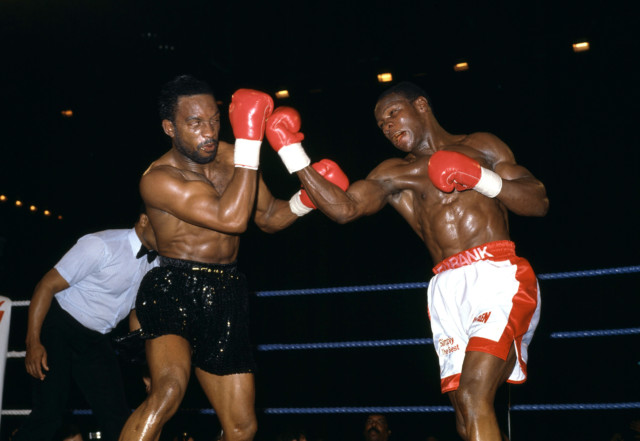 Eubank claimed the WBO middleweight title when defeating Benn in 1990

The depth of British talent in the middle and super-middle divisions through the 1990s was scary.

But Eubank beat Michael Watson twice and Benn once, with the rematch ending in a draw.

The second win over Watson ended in tragedy with the loser suffering life-changing injuries to his brain that ended his career.

Eubank’s went on but the heartbreaking consequences of his 29th win meant he boxed the remaining 23 without his killer instinct.

The final three fights of Eubank’s fine career tainted his record, he was outpointed by Calzaghe at 11 days’ notice and lost twice to Carl Thompson.

But his supreme chin, unforgettable style and long list of bitter rivalries mark him out as a true one-off. 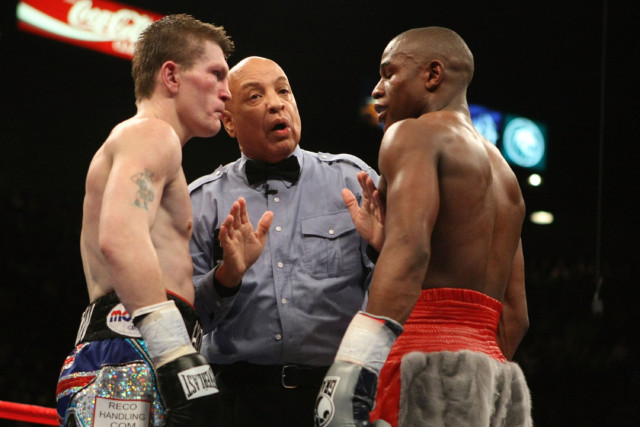 Hatton went toe-to-toe with Mayweather in his own backyard

The Manchester icon would run away with a straight popularity contest, such is the dedication of his loyal fans.

The Guinness and Only Fools and Horses-loving two-weight champion hit the very pinnacle the epic night he out-toughed the granite Kosta Tszyu to become the IBF, Ring Mag and lineal light-welterweight champion in 2005 at his local arena.

Sadly, when he tried to halt Floyd Mayweather’s streak in 2007, after his legion of Man City fans had once again taken over the Las Vegas strip, overzealous ref Joe Cortez stopped him producing his best ferocious pressure-fighting and he was stopped in ten.

And by the time he faced Manny Pacquiao in 2009 his yo-yo dieting had caught up with him and thousands of British hearts were broken in the second round.

Hatton has insisted Calzaghe is Britain’s finest fighter but few would argue he is the nation’s most-loved. 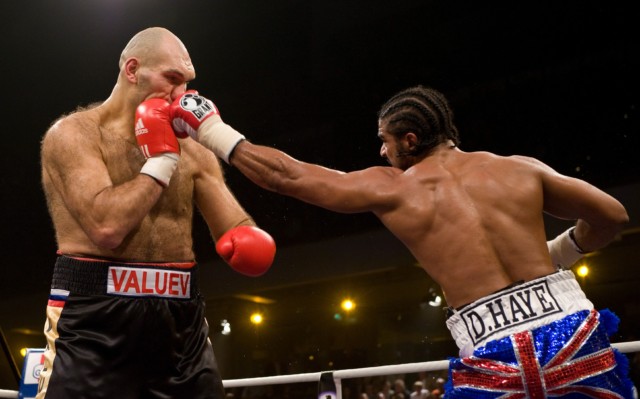 New fight fans delving through the record books should not let the Hayemaker’s final two defeats by rock-hard Tony Bellew cloud their judgement.

Under mastermind Adam Booth, Haye bounced back from a shock loss to Carl Thompson to become unified, lineal and Ring cruiserweight king, cleaning out the division with the highlight 2007 win over Jean-Marc Mormeck coming in France inside seven.

And he emulated Evander Holyfield by leaping up to heavyweight and dethroning 7ft Nikolai Valuev.

Haye should have bowed out after his defeat by legend Wladimir Klitschko with his head held high but his OTT excuses about a broken little toe undermined a wonderful career that should have ended long before Bellew dominated him twice. 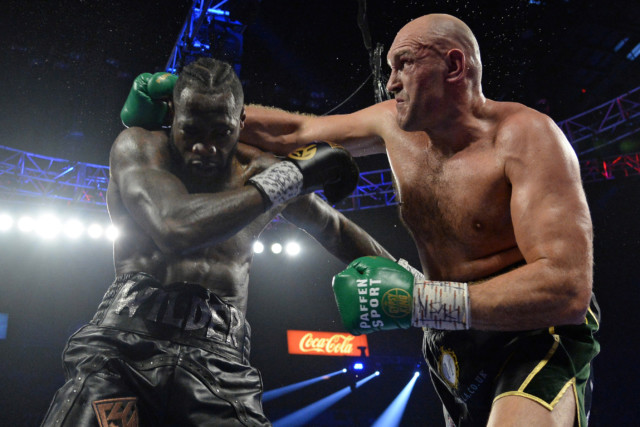 Wilder was destroyed by Fury in their Vegas rematch

That performance against Wladimir Klitschko, in the ten-year champ’s adopted backyard, who had tried to pull every dirty trick in the book, was sublime.

The sheer courage and fortitude shown in the first Deontay Wilder clash, after three years without a serious round, was incredible and should have ended in a win.

And the precision power and ruthless aggression he showed in executing the heavyweight division’s executioner-in-chief in the rematch dumbfounded almost everyone.

The stick-and-move slapper who danced like a lightweight was suddenly also a heavyweight knockout artist.

It’s often hard to put heavyweights in the pound-for-pound lists because once you take away their size and power, it is hard to know what is left but, with Fury, his skillset and fight IQ would flourish down at flyweight.

Sadly, like Canelo Alvarez, the drugs ban he served for failing a test before that iconic Klitschko win leaves a blemish on his record.

And that is especially sad as he looks like the sort of once-in-a-lifetime fighter who would never need help.

But the three elite level wins – two against Wilder and Klitschko 17 months before he was still capable of a barnstormer with AJ – make him something special we must see more of. 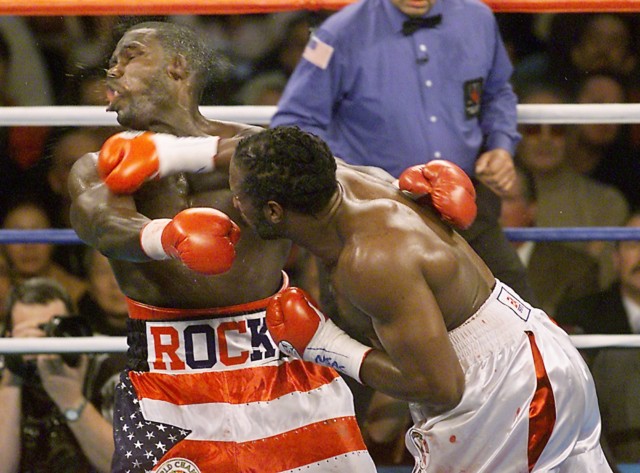 The last undisputed heavyweight champion of the world.

The conqueror of Vitali Klitschko, Evander Holyfield and Mike Tyson.

One of the few great fighters to walk away at the total pinnacle and never make the mistake of returning to tarnish his legacy.

The three blemishes on his record, shock KO defeats by Hasim Rahman and Oliver McCall and the scandalous draw with Holyfield, were all avenged in ruthless fashion.

Lewis’ bizarrely dedicated critics insist on pointing to how Tyson was faded and Vitali was stopped on cuts while ahead on points.

But most right-minded fight fans salute Lewis’ collection of all of the major belts, his CV and his style swap from young KO artist to pugilist specialist. 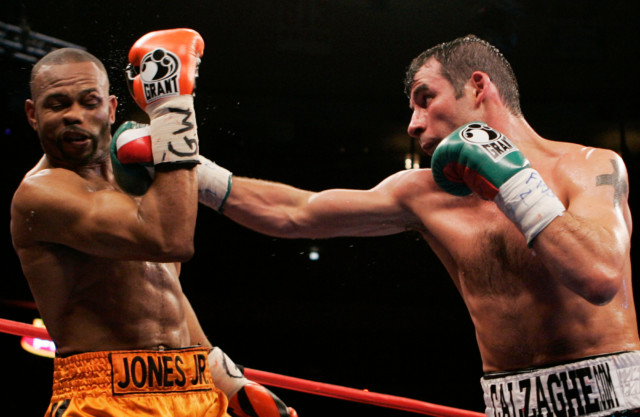 Try to sit down and write a boxing rags-to-riches boxing story better than the Welsh Dragon’s.

A rapid-handed southpaw who glided up to light-heavy and headed to America to stare down his doubters and beat two legends in Bernard Hopkins and Roy Jones Jr.

And he did it all with father-and-trainer Enzo in his corner, without any boxing background, the dad-and-son team took on the world and were never beaten.

Calzaghe threw dozens of accurate punches, didn’t ship too many and always got off the floor when he had to.

A real fighter’s fighter, whose skills are not appreciated enough by blood-and-guts seeking fans.

And he achieved the rarest of things by leaving us wanting more as fans still debate how dream bouts with Nigel Benn, Steve Collins and Carl Froch would have gone.

The difference is they had all been beaten and, in 46, the great JC never was.