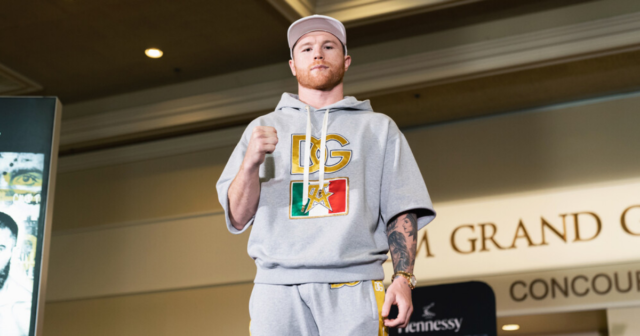 CANELO ALVAREZ is happy to fight FIVE times a year and is ‘always in the gym’ as Mexican star admits: ‘This is what I love’.

The four-division champion is set for his FOURTH bout in just 11 months as he faces Caleb Plant in an undisputed title decider over the weekend.

Canelo Alvarez is happy to fight five times a year

And if he has it his way, the unprecedented activity in the ring will continue.

Canelo said: “If I have the opportunity to fight three, four, five times [per year], I’m happy.

Canelo’s comments follow after wins over Callum Smith, 31, Avni Yildirim, 30, and Billy Joe Saunders, 31, on his road to super-middleweight supremacy.

All three were as a free agent, having terminated his promotional deal with Golden Boy and sports streaming service DAZN.

Instead, he linked up with promoter Eddie Hearn on a short-term basis, and still featured on DAZN.

Hearn plans to still represent Canelo, 31, going forward, but to fight Plant, 29, it had to happen with Premier Boxing Champions on Showtime.

Alvarez’s ability to jump from TV platforms and boxing promoters means he can control his career.

And it allows Canelo to avoid any boxing politics or road bumps, setting a precedent to other champions.

“He is someone who just stays in the gym and gets back in there after each fight, it is great to see really.

“It is great to see a champion like that who is prepared to fight so often.

“I watched something that he has started to take up golf which takes his mind off boxing which is normally 24/7.

“I believe it is a wake-up call to other champions that four fights a year is possible and a good number.

“I liked to have breaks between fights where I didn’t do anything but he is a different type of fighter and he just loves the sport.”