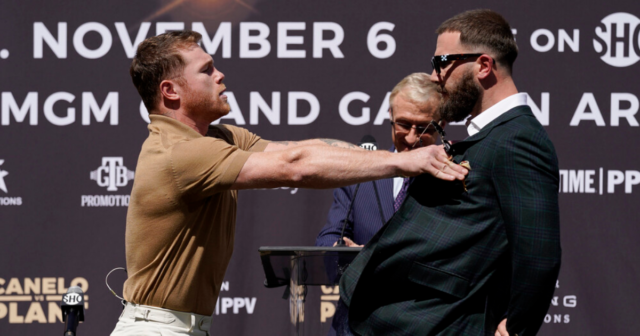 CANELO ALVAREZ believes his upcoming undisputed clash against Caleb Plant is going to be easier than his win over Billy Joe Saunders.

The 31-year-old, who has not lost since being beaten by Floyd Mayweather in 2013, forced Saunders to retire on his stool at the end of the eighth round in May.

He will now look to win the fourth and final belt in the super-middleweight division when he takes on Plant on November 6.

And Canelo feels a bout against Plant will be even more straightforward than his victory over Saunders.

Speaking on The Last Stand podcast, he said: “Yeah, same [as Saunders], but different because Billy Joe Saunders is southpaw and Caleb Plant is orthodox.

“So, it’s gonna be I think maybe a little easy for me.”

Canelo has stopped three of his last four opponents, with the only man to go the distance with him since May 2019 being Callum Smith.

But while Alvarez is supremely confident heading into the undisputed clash, he admits Plant will be dangerous early on in the fight.

“The first round is gonna be difficult because of his style,” he added.

“But I know how to break down the style. Maybe after five rounds, I’m gonna do my things.”

Alvarez is widely regarded as the best pound-for-pound fighter in the world.

He has won 56 of his 59 professional bouts, losing to Mayweather and drawing to Jorge Juarez and Gennady Golovkin.

Meanwhile, Plant is unbeaten in his 21 pro fights but has not fought anyone of the calibre of Canelo.

The pair have a clear disdain for one another and came to blows in the recent press conference.

Plant attempted to throw a punch at Canelo but the Mexican dodged it and then threw a right hand of his own which left the American with a cut below his eye.