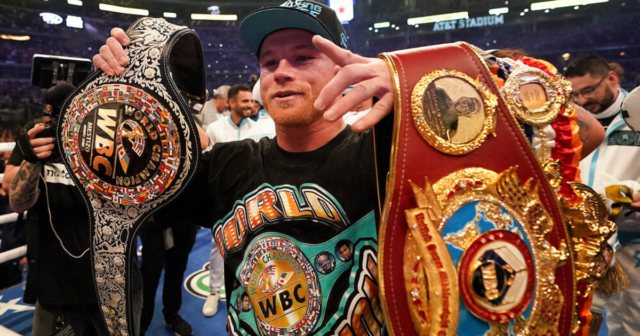 The Mexican’s team have been in negotiations to fight the only other boxer with a world title in that weight.

Canelo Alvarez will reportedly NOT fight Caleb Plant next

But an agreement has failed to be reached, with ESPN reporting that both parties have gone their separate ways.

Canelo could now step back up to light-heavyweight to fight WBA king Dmitry Bivol.

But Plant is fuming at the collapse of his biggest fight to date.

He told ESPN: “His bark is bigger than his bite.

“Canelo was offered the highest guarantee of his career: He was set to make $40 million plus Mexican TV rights and his Hennessy sponsorship.

But Plant says that ‘ridiculous requests’ led to the fight being scrapped – one of which was that if Plant got ill or injured Canelo would get a replacement for the same money, but if it was the other way around Plant would have to wait.

He added: “We’re at seven-and-a-half weeks from the fight; we’ve lost valuable time that should be spent promoting and drug testing for a fight of this magnitude.

“I question whether legacy or money is their real motive.

“We’ve been waiting for him to get done with his wedding, shooting his TV show, his golf tournament and now have tried to give him everything he wants and more to make this fight.

“I’m more than willing, able and ready to fight Canelo Alvarez on any date. Those are the real facts and if anyone has something to say differently, we have the paperwork to prove it.”

Alvarez previously announced that he aims to have four fights this year.

He stopped Turkey’s mandatory WBC contender Avni Yildirim after knocking him down in the third round back in February.

Then in May he thrilled a sold-out crowd in Texas at the AT&T Stadium when he beat then-WBO champion Billy Joe Saunders.

The Englishman suffered a broken orbital bone in the eighth round that forced his corner to throw in the towel ahead of the ninth.