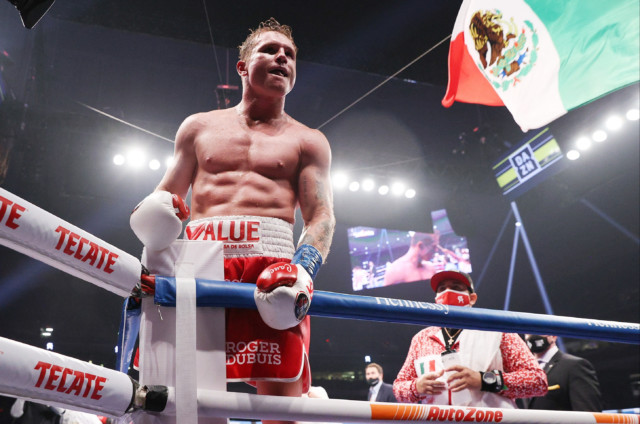 The slick southpaw faces Brit basher Canelo in Texas this Saturday as they put their super-middleweight titles on the line.

Saunders is perhaps given the best chance out of the lot so far but if history is anything to go by, Alvarez has a taste breaking hearts from these shores.

So far Canelo has yet to seriously come under the cosh against the best Britain has to offer.

But with the hopes of a nation behind Saunders, here SunSport explores what his countrymen have warned the WBO champion.

Ricky’s brother was the first to face Canelo, who was aged 20 at the time and already challenging for the vacant WBC light-middleweight crown.

Hatton took the fight the distance and looked very good in spurts, but joked he still felt the affects of Alvarez’s force all those years later.

He told Box Nation in 2017: “Even though it was a painful experience, I still say to this day I’m still on two paracetamol a day now!

“It was enjoyable on the whole and I’ll look back on it with fond memories.”

In his return fight after beating Hatton, Canelo boxed Sheffield’s Rhodes in Mexico, winning in the 12th and final round.

In 2017, asked by Sky Sports for Alvarez’s weaknesses, Rhodes said: “I couldn’t find any. He seems to have got the full package.”

Questioned on Canelo’ ability to take a punch, he said: “Great chin. I hit him with some big shots, it didn’t seem to faze him.

“He’s not your typical aggressive Mexican, he doesn’t get hit much, and has great movement.” 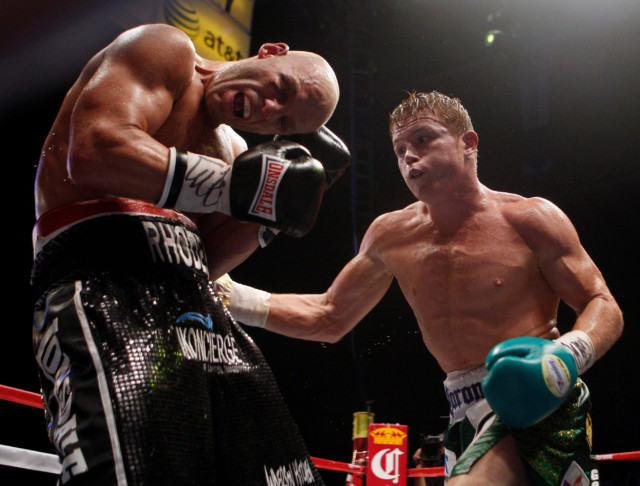 It would be another five years until an Englishman fought Canelo, but in 2016 Khan shocked everyone by stepping up to middleweight.

And the 2004 Olympic silver medalist was doing well to outbox the Mexican until he was brutally knocked out with a big overhand right in round six.

Khan opened up on the sheer force of Canelo’s right hand in a 2017 interview with FightHype.

He said: “With the shot I got caught off Canelo, I think Canelo would have knocked a horse out, man, with that shot, trust me, man. 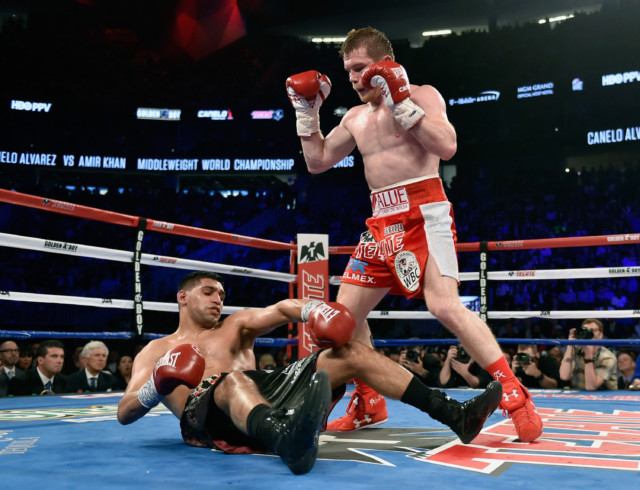 Amir Khan was knocked out by Canelo Alvarez in 2016

Right after wiping out Khan, Canelo moved back down to light-middleweight where he stopped Liverpool’s Smith in nine rounds.

He hammered the champion’s body to bits, while scoring three knockdowns, but it was his precision and timing which left the most telling mark.

Smith said on BoxNation in 2017: “His timing and speed are very, very good. Obviously, he’s got very good punch variety.

“He lets combinations go very well. But I said, early on I fell short with a couple of shots and the next time I feinted and I could just see him teeing something up.

“He always had me twitching with his little feints, and slick backhands and he hits hard enough to not get hit by one of them.” 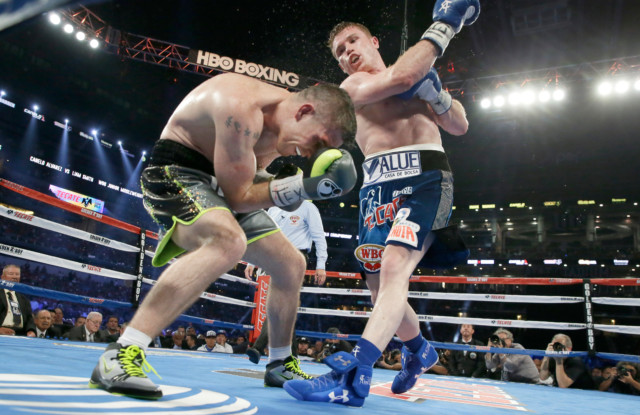 Liam Smith was beaten in nine rounds by Canelo Alvarez

Fielding was a shock opponent for Canelo in December 2018 as he moved up to super-middleweight.

It was easy work for the pound-for-pound No1, who scored four knockdowns before it was waved off in round three.

Fielding said: “He’s strong. I was catching him with some shots but he kept coming forward. The body shots, it was more like the wind was getting took.

“I stood there too long. I thought I could mix it with him and I shouldn’t have. You’ve seen the height of me compared to him, I should have kept it long.

“But I just stood there with someone who’s elite and who’s strong and he caught me. I gave it everything and the better man won.” 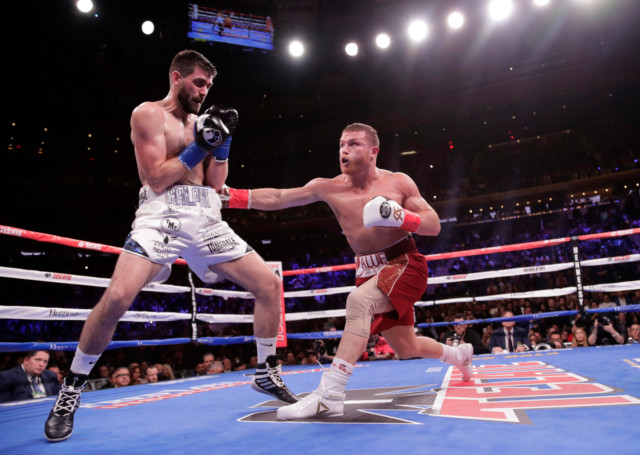 Smith was the last to try and bring bragging rights back home and also avenge defeat for his older brother Liam.

But instead, he was convincingly dominated over 12 rounds last December, surrendering his super-middleweight belts.

Smith told Sky Sports: “He is very clever in terms of the jab. He walks you down. With anybody else, you would jab. But he wants you to jab because he’s a counter-puncher.

“So you don’t throw as many jabs and while you are waiting, he closes the space down without throwing anything. Then he jabs and hits you. You think: ‘How did that land?’

“He keeps you guessing all the time. You are hesitant. His best asset was his presence and his defence. He was so hard to hit clean. When I was throwing he was riding them, making me miss.

“You aren’t landing so you stop fully committing to shots. He takes away what you are good at.” 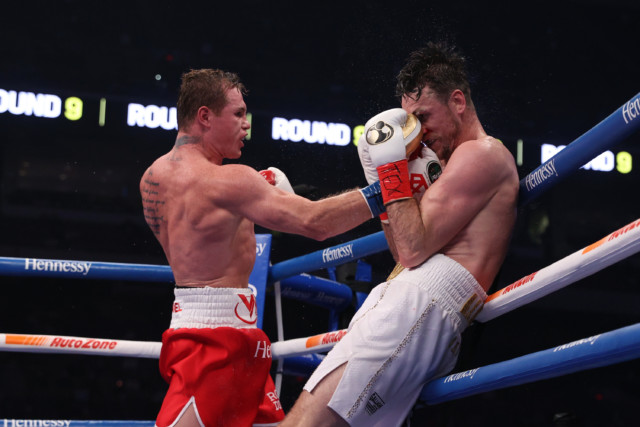 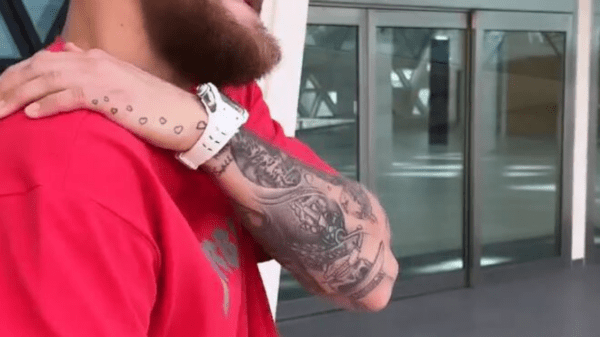