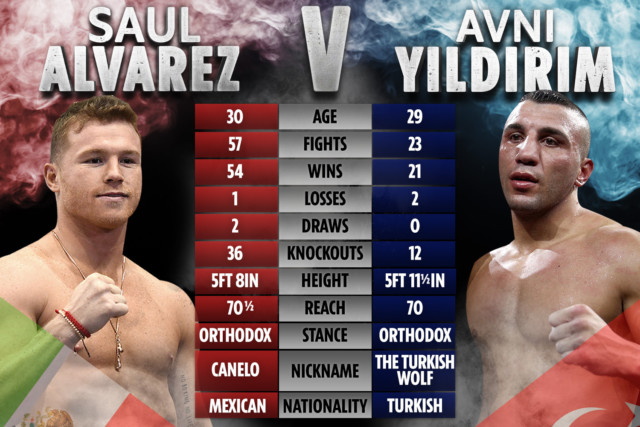 The 30-year-old won the WBA ‘Super’, WBC and Ring Magazine titles after outpointing the Liverpudlian, and he is wasting no time in returning to the squared circle.

In what will be the Mexican legend’s 58th fight, Canelo will be fighting in Miami for the first time since 2008 as he defends his straps at the Hard Rock Stadium.

His opponent is Turkish super-middleweight Yildirim, who was handed the world title bout on the back of a defeat to Anthony Dirrell in February 2019.

The 29-year-old had lost just once prior to that encounter against the American after Chris Eubank Jr brutally knocked him out in the third round in 2017.

Few, if any, are expecting the Turkish Wold to pose a threat to Canelo – who has lost just once since turning professional 16 years ago.

Despite winning 21 out of his 23 fights, Yildirim is yet to beat anyone of note, and has lost in both meetings when stepping up against tougher opposition.

He may be over three inches taller than Alvarez, but as shown in the pound-for-pound star’s win against Smith, he has no problem facing bigger men.

And Canelo – who boasts 24 more knockouts than Yildirim – is already looking past his rival as a unified fight to face Billy Joe Saunders heats up.

WBO champ Saunders, 31, took aim at Canelo earlier this month for only fighting boxers that are past their prime.

It has been reported that should Canelo beat Yildirim, then his fight against the unbeaten Brit could be announced in the ring immediately after.

TalkSPORT’s boxing editor Michael Benson tweeted: “Eddie Hearn has stated Canelo vs Billy Joe Saunders could be officially announced with both face-to-face in the ring immediately after Canelo vs Avni Yildirim next weekend, so long as he wins and comes through unscathed.

Commenting on the potential clash against Saunders, Alvarez said: “It’s important for me and my trainer Eddy [Reynoso], because very few people have achieved becoming undisputed champions.

“And that’s a short-term goal for us. To win all the titles at 168 pounds. Obviously, no Mexican has ever done it. So that’s our short-term goal, to keep making history.

“And that’s what we want. Eddy and I have always wanted the best. And we want to keep making history.”