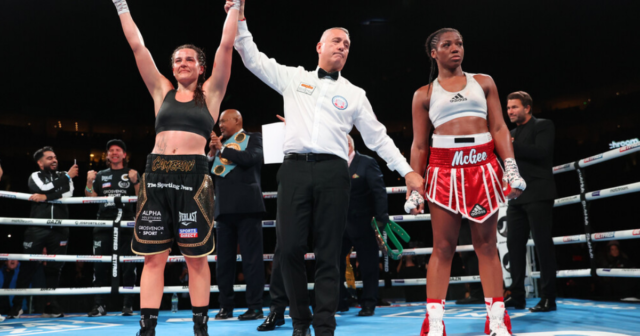 CHANTELLE CAMERON was crowned unified light-welterweight champion after beating Mary McGee – and puts herself one win away from undisputed glory.

Cameron saw off McGee over ten rounds, in what was promoted to headliner at the O2 Arena after Dillian Whyte pulled out of fighting Otto Wallin with a shoulder injury.

She added the IBF and Ring Magazine titles to her collection while making sure her WBC belt went back home with her to Northampton.

Cameron will now await the winner between Kali Reis, 35, and Jessica Camara, 33, where the WBO and WBA titles will be on the line on November 19.

But the British star has no preference who prevails, but was quick to praise rugged McGee after ten frantic rounds.

Camerson said: “She was tough, she took some shots, I always thought she’d be tough and powerful, she’s a really tough girl.

“It doesn’t matter who I face next I’m taking the belts anyway.

“It feels amazing, thank you Eddie, thank you to all the fans for supporting me.”

Cameron, 30, was the slicker operator throughout, often managing to walk McGee, 35, onto shots, as the American did not stop coming forward.

She chose to box the majority of the fight on the back foot, controlling it with her jab, but put enough distance between herself and McGee as the more accurate puncher.

Cameron landed the more eye-catching shots during the action, with both her left hook and right hands.

Advertisement. Scroll to continue reading.
In this article:chantellecameron, marymcgee, onewin