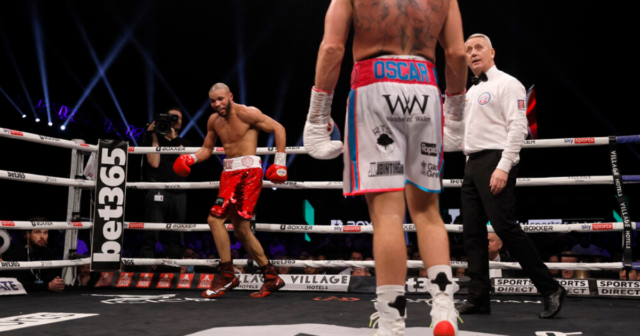 CHRIS EUBANK JR claimed he could have knocked out Liam Williams whenever he fancied – but instead ‘punished him’.

The middleweight settled his bitter feud with Williams in one-sided fashion, scoring four knockdowns during the 12-round win.

But Eubank Jr, 32, later insisted he purposely refused to go for the KO, to instead drag out the beating over the distance.

He told Sky Sports: “I wanted to teach this man a lesson. He had said some menacing things to me leading up to this fight so I wanted to punish him.

“I thought, ‘I do not want to knock this man out in the first round’. I want to get people like him out of boxing.

“You saw the fight – headlocks, headbutts, crazy stuff. I’m surprised he didn’t get disqualified. I punished him like I said that I would do.”

Eubank Jr, who revealed he BIT Williams, said stopping the Welshman, 29, would have given his rival ‘an easy way out’.

He continued: “If I stepped on the gas at any point in the fight, he would have been gone. But he needed to be taught a lesson.

“I didn’t want to give him an easy way out. There are levels to this game. Don’t be a big mouth to guys that you can get hurt against.

“He thought he was something that he wasn’t.”

Despite Eubank Jr’s comments, ringside pundit Johny Nelson was not so convinced.

Nelson, 55, responded: “I don’t buy that. I don’t believe him. If he could have got the knockout, he would have.

“His shot wasn’t landing. He couldn’t find the knockout shot. There is no way in a million years I believe him.

“He made a fundamental mistake – he should have stayed professional.”