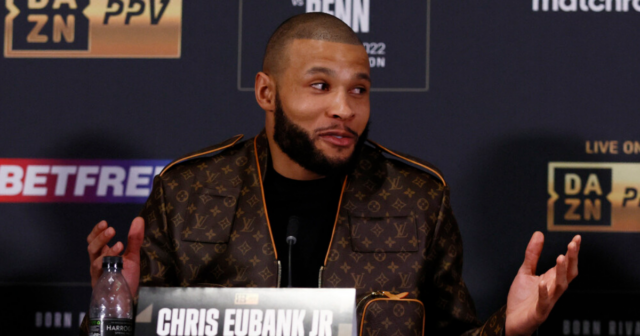 CHRIS EUBANK JR said a rehydration clause in his contract with Conor Benn has been put in place to avoid a “public execution”.

The pair are set for a DAZN pay-per-view blockbuster on October 8, almost 30 years after their dads’ famous rematch.

The weight disparity has meant the two will meet between the 154lb light-middleweight and middleweight limit.

And due to Eubank’s superior size, a rehydration clause limiting him to what he can weigh the next morning has been put in place.

Although the exact amount was not revealed live on stage as the fighting sons came face-to-face in London ahead of the fight.

Benn has continued to climb the welterweight rankings to build on a first world title shot.

Eubank Jr meanwhile has grown increasingly frustrated at his lack of championship opportunities.

So he turned his attention to Benn following their fathers’ iconic fights in the 1990s.

Benn regards his fight with Eubank Jr as a revenge mission and vows to get one back for his mentor father.

He said: “I’m taking care of the family business.”

Conor Benn at his press conference with Chris Eubank Jr

Did you miss our previous article…
https://www.sportingexcitement.com/boxing/sign-up-for-the-suns-boxing-newsletter-for-all-the-latest-news-fixtures-and-results-from-across-the-sport/